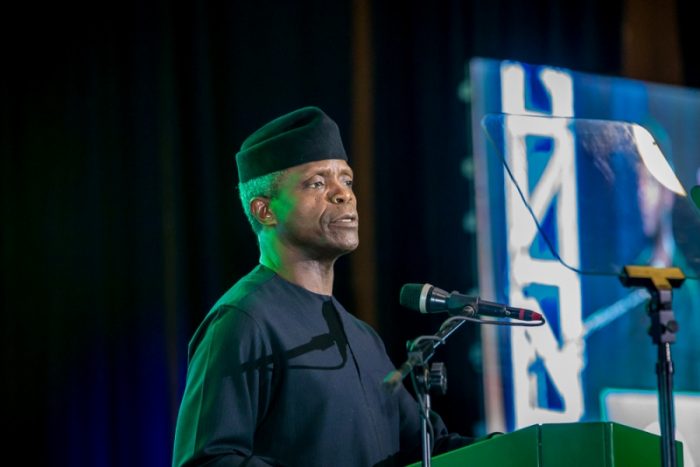 Vice President Yemi Osinbajo has heaped praised on his boss, President Muhammadu Buhari as he turned 76 on Monday.

Osinbajo who is in Vienna, Austria to participate in the Africa-Europe High Level Forum with other African and European Heads of States or Government, described Buhari as a man who genuinely loves Nigeria.

Osinbajo alongside Buhari are seeking a second term in office in the forthcoming general elections billed for February 2019.

Sending his greetings, Osinbajo took to Twitter and wrote, “To a man, who has been exemplary in life and his commitment to Nigeria,” he tweeted along with a painted sketch of Buhari.

He added that, “To a man who has a great sense of humour,” he said of Buhari who had three failed attempts to be President.

“To a man who genuinely loves the Nigerian people and to a man I am privileged to call Boss, Happy 76th Birthday!” Osinbajo wrote.

President Buhari was born in Daura on 17 December 1942, and after his early education in both Daura and Katsina, he joined the army in 1961, one year ahead of Babangida, who joined in 1962.

After initial training at the Nigerian Military Training College (NMTC) now known as Nigerian Defence Academy (NDA), Buhari went for cadet training at from 1962 to 1963 at Mons Officer Cadet School in Aldershot, England.

He was commissioned a Second Lieutenant at the age of 20, and appointed Platoon Commander of the Second Infantry Battalion in Abeokuta.

From then on, his military career blossomed. At the head of several commands, before, during and after the civil war, Buhari in 1973 attended the Defence Services Staff College, Wellington, India.

After the 1975 coup that brought Murtala Muhammed to power, Buhari was appointed governor of the North Eastern state, where he is now leading, as civilian president and commander-in-chief, a charge of Nigerian troops against Boko Haram insurgency, since 2015.

In 2003, Buhari had his first shot at the presidency. He did not win. He tried again in 2007 and 2011 and again failed to win. On his fourth attempt in 2015 alongside Prof Osinbajo, he made the record as the first challenger to defeat an incumbent in the presidential election in Nigeria.