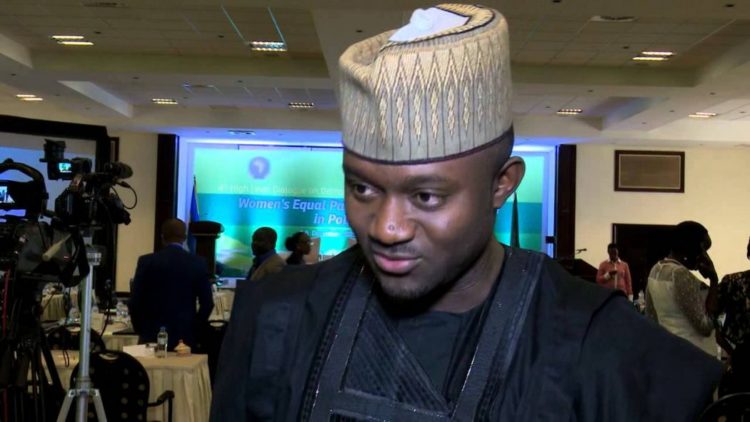 The `Not too Young to Rule sponsor, Samson Itodo on Sunday emerged the winner of 2018 Future Awards Young Person of the Year 2018.

Itodo was the co-sponsor of the `Not too Young to Rule bill along with Tony Nwulu of the House of Representatives.

The bill sought to challenge the post-Independence laws that preclude the under-30s from participation in Federal, State and Local Government election.

Itodo, using lobbying and citizen advocacy, was able to get the bill passed by the National Assembly and signed into law by President Muhammadu Buhari.

In clinching the ultimate prize, Itodo was able to ward off opposition from the other nominees such as ace musician, David Adeleke (Davido), Dr Mahmoud Maina, a researcher and scientist who discovered the ground breaking research in degenerative Alzheimer disease in 2018.

There were other nominees such as Nemiatari Ajienka, the reputable youngest lecturer at the Edge Hill University in the United Kingdom and Tomi Adeyemi a Children Fiction writer.

Another winner during the gala night was Ayodele Olalekan Sipasi, the founder of the LAfrica Integrated Farms and project ozone. He won the Future Prize for Agriculture.

Linus Unah won the Future Award Prize for Journalism, over his reportorial duties with the Guardian of U.K., Al-Jazeera and others.

The Prize for Comedy went to the child actor, Mark Angel, a comic chops with the five -year old Emmanuella. The comic has gathered over one Million subscribers on You Tube..

The Prize for Fashion went to Tosin Ogundadegbe, the Head Stylist, GuarantyTrust Bank.

Ayobola Kekere-Ekun, a visual artist known for her exceptional quilling work, an art that involves the use of strips of coloured papers to create stunning designs got the gong for Creativity,.

The Prize for Sports was picked up by the Super Eagles Stand-In Captain, Ahmed Musa for his outstanding contributions to the national team during the 2018 World Cup.

After receiving the 2018 Future Awards, Itodo said it would spur him for greater responsibility.

“The journey has not been easy because when we are pursuing the Not too Young to Run bill, we were met with rejection but we stood our ground until it was signed into law.

“I am advising all the youths to come out to vote come 2019 because the future of this country belongs to us, he said.

The Future Awards Africa has been called the Nobel Prize for Young Africans, and the most important youth awards by Forbes.

It is a set of prizes given annually to celebrate and accelerate innovation, creativity and enterprise amongst young Africans aged 18- 31 and has produced over 150 winners and over 1550 nominees since its first edition in 2006.

It is presented in conjunction with The Future Project, which has a mandate to build empowered citizens across Africa, through (inclusive) enterprise and (active) citizenship.

Its focus on Human Capital Development is informed by the value proposition that Africa’s growth needs a generation of young people who are gainfully employed and able to demand and secure better leadership.

The 13th edition of the award according to the organisers have been increased to 20 categories to cater for more outstanding youths in various fields.