30 Fans To Get Free Decoders At GOtv Boxing Night 17 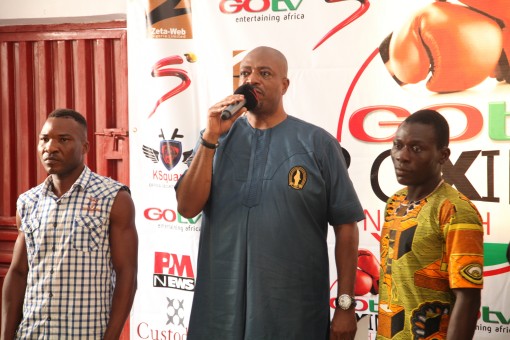 A total of 30 GOtv decoders will be given out at GOtv Boxing Night 17, holding on 28 December at the Tafawa Balewa Square, Lagos.

This was announced yesterday by Flykite Productions, organisers of the event.

According to Jenkins Alumona, Managing Director, Flykite Productions, this will be the highest number of decoders given out since the event began in 2014.

In previous editions, he recalled, the number of decoders given out ranged between 10 and 20.

He explained that the number has been increased by the sponsors in appreciation of the support fans have given to the event and as a way of celebrating the festive season.

The 30 decoders will be won through lucky dips to be held in between fights.

“This is the highest number of decoders the sponsors have given out. That the number has gone up is a sign that the sponsors appreciate the support the fans have given to the sport and to make the festive season more exciting. Don’t also forget that this is the biggest ever edition of the event. It will combine boxing and music, with the latter provided by live performances by Burna Boy, Wande Coal, Teni Da Entertainer and Daddy Showkey. This will be a cracking show; a well-rounded entertainment package exclusively for the festive season,” he said.

He added that boxing fans will have the opportunity to watch the World Boxing Federation Intercontinental super featherweight title bout between Nigeria’s Seun “The Machine” Wahab and Tanzania’s Issa “Peche Boy” Nampepeche, the biggest of the eight fights lined up.

Alumona explained that with the winner of the fight being eligible for the world title, it is the most high-profile bout staged in Nigeria in a long while.

The show will witness another international duel between Victor Kemavor of Ghana and US-based Nigerian, Oluwafemi “The Eagle” Oyeleye.

The best boxer of the event will go home with the Mojisola Ogunsanya Memorial Trophy and a cash prize of N1.5million.