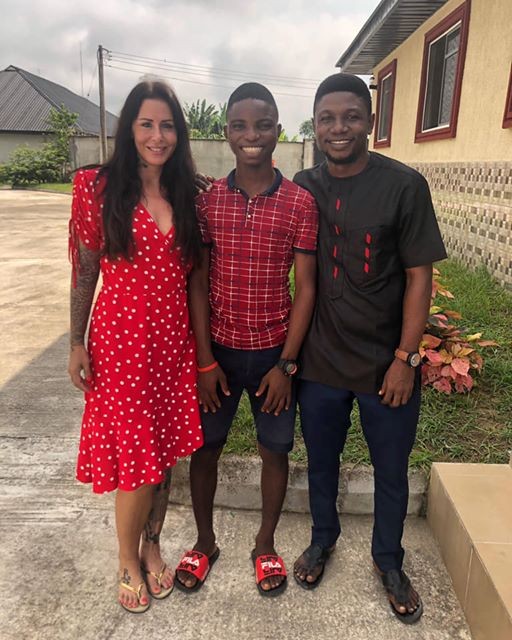 Danish aid worker, Anja Ringgren Loven narrated how she rescued a boy, Ernest in 2014 during an advocacy programme in a village in Akwa Ibom after he was branded a witch .

The aid worker took to Facebook to celebrate Ernest after he came second in his class. She said that this was the same boy that was driven away by his family and couldn’t speak English.

She described his academic performance as the best Christmas gift ever and one money cannot buy.

Back in January 2014, almost 5 years ago today David Emmanuel Umem and I went to do an advocacy programme in a local village. In the middle of our programme, to our surprise, some of the local villagers pushed a young boy in our direction. The villagers told us to take the boy with us because he was a witch. Let me remind you that our advocacy programme was about superstition. The boy looked very sick wearing dirty clothes and with wounds on his body.

This was the day Ernest was saved.

When Ernest was saved he did not speak English. He could not even write. When he started school he struggled to keep up but his challenges in school became his determination to be the best. After only a few months he could write and speak English and he even took first position in his class. Year after year he continued to take first position, not only in his class, but first position in the entire school. We have celebrated Ernest many times, not only because of his outstanding achievements, but because of his strong determination to be the best despite all odds.

Back in 2015, a year after Ernest was rescued, I sat down with him one evening to learn more about how he managed to survive.
Ernest was accused of being a witch and such accusation will not let a child stay alive for very long. For 2 years Ernest slept inside bushes to hide himself. His body was covered in mosquito bites every night but he had to accept it or else he would risk being killed.

While struggeling to survive Ernest met another young boy, also accused of being a witch. The two boys became friends and during the day they would look for small jobs to earn a little money. Ernest told me that it gave him a little sense of protection to have a friend. Together they helped each other to stay alive.
But one night while the boys were sleeping inside the bushes they were caught by a group of men. The men dragged the boys by their legs out of the bushes. Ernest and his friend were screaming and fought to get away. Ernest managed to get free and ran to hide in a bush. His friend was not that lucky.

While hiding in the bush Ernest could see how his friend was screaming and crying while the men tied a robe around his neck. The other end of the rope was tied to a car. His friend did not die immediately. He fought for his life trying to breathe while the car dragged him around. But within a few minutes he had to give up. He died slowly in fear. He was only 9 years old.
Ernest witness everything.

Ernest was now alone again. He felt quilty of not being able to protect his friend. One night he woke up in pain. The men were back. They had set fire to Ernest leg. The men tried to burn him alive while
he was sleeping. Once again Ernest escaped.

I cannot even begin to imagine how such horrors must feel like for a young boy. Not only the fear and the struggle to survive, but the loneliness of being unwanted must be the worse feeling for us as humans. A feeling worse than death.

This year David and our Education Officers Don Udowan, Edidiong and Mr. Bassey together with our Director of Child Development Nsidibe Orok decided to change Ernest to a high standard school with highly intelligent students for him to get more competition.

To even get admitted to such high standard school one must have to be subjected to a very difficult exam where only a very few number of students will be admitted by the end of the day. Ernest took the exam and got a very high score and was admitted. We were all very excited.

Due to some administrative procedures Ernest started the new school 3 weeks later than the rest of the students. So Ernest missed out of 3 weeks and had to use many nights to study to keep up with his class mates. It was a tough start for him at a very competitive school with very intelligent students.

Last week was the end of the first term and Ernest got his result. We were all very surprised. We never expected Ernest to take a top position because the school is so highly competitive, but Ernest came home with second position out of 50 students in his class !!!

This is the best Christmas gift ever. One that money cannot buy.