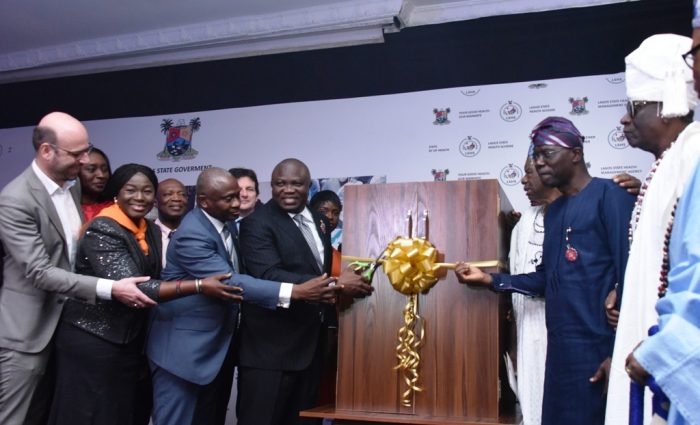 Lagos State Governor, Akinwunmi Ambode on Tuesday launched the much-awaited health insurance scheme of the State Government, saying it was gratifying that the State was now on a journey to achieve affordable, comprehensive and unhindered quality healthcare services for all residents.

Speaking at the official launch of the scheme held at the Civic Centre, Victoria Island, Governor Ambode said the decision to come up with the initiative, which had already been backed by law enacted in May 2015 by the State House of Assembly, was inspired by the desire of government to provide access to affordable and quality healthcare services and truly bring about healthy population.

He said though the task of providing health insurance for residents of the State was a tough venture, but it was nonetheless historic and heartwarming that the implementation of the policy which started three and half years ago by his administration had eventually culminated in its smooth take off.

“I am delighted that we have fulfilled that promise and are gathered at this historic and momentous occasion today for the formal launch of the Lagos State Health Insurance Scheme (LSHS). It is historic because it marks a distinct milestone in the State Government’s effort to ensure the sustained provision of a critical social service to our teeming Lagos population,” the Governor said.

He recalled that since the passage of the Lagos State Health Law, the Ministry of Health and the Lagos State Health Management Agency (LASHMA), the entity established by the law as the regulator of the scheme, had been working with several local and international technical partners to design the scheme in line with the requirements of the law and best practices driven by local needs, experiences and technological developments.

He said though the effort was time consuming, it was necessary to ensure that the people had access to healthcare scheme that was fit for purpose and sustainable, adding that one percent of the consolidated revenue of the 2018 budget had been put into the scheme to get it running.

Giving details, the Governor said: “It is a known fact that out of pocket payment for healthcare deters access to Health Services especially for indigents and other vulnerable persons in our society. This situation contributes to increased morbidity and mortality with the resultant adverse effect on the human capital development and economic prosperity of Lagos.

“To ensure that the indigent and vulnerable, who are most susceptible to the difficulties of out of pocket payments for healthcare, are enrolled into the Lagos State Health Scheme, we have set aside 1% of the State’s consolidated revenue in the 2018 budget for this purpose.”

He said by law, the health insurance scheme was mandatory for all residents, while the process of identifying and registering the beneficiaries had already commenced in a number of developing communities in the State whose residents were mostly indigent, adding that provision had also been made for all State and Local Government workers and their nuclear families to be enrolled at a subsidized rate.

While assuring that robust mechanisms have been put in place to ensure transparency in operations and management of the funds, Governor Ambode also expressed optimism that the scheme would outlive his administration, adding that it was instructive that the Governorship candidate of the All Progressives Congress (APC) in the State, Mr Babajide Sanwo-Olu had already committed to its sustainability.

Besides, the Governor urged corporate bodies, high net-worth individuals, government agencies, and multilaterals, among others to key into the scheme and use it as a vehicle to positively impact their communities by adopting vulnerable groups of persons and funding their healthcare coverage, adding: “It will be an investment which will yield incalculable dividends because every life saved could be a very valuable member of society and potential leader.”

He also urged all Lagos residents to embrace the scheme which, according to him, aligns with global best practice in healthcare financing, adding that a flexible payment plan had also been put in place.

The Governor, who also recalled the recent launch of Human Capital Development Programme by President Muhammadu Buhari which focuses on three main areas of health and nutrition, education and labour force participation, said the initiative was another demonstrable evidence of why Nigerians should support the APC government to continue the good works in the country.

“The launch of the initiative by the President ties in with what we have done here today. This is what our great party, All Progressives Congress stands for. Our gubernatorial candidate, Jide Sanwo-Olu, is also committed to this initiative. His presence and that of his running mate is a clear indication of our doctrine of continuity in governance.

“I urge all Lagosians to ensure that this people-oriented scheme is sustained by voting wisely and voting continuity,” he said.

Earlier, Lagos State Commissioner for Health, Dr Jide Idris said over 150 health care providers both public and private institutions have been registered for the scheme, adding that the initiative would cater for basic primary and selected secondary healthcare services for beneficiaries such as treatment and management of malaria, hypertension, common childhood illnesses, antenatal care services, delivery including caesarean section, among others.

“It is pertinent to note that while we understand that not all stakeholders’ needs have been accommodated, it is a suitable starting point which as the scheme progresses, will be reviewed leveraging on more detailed data and info.

“We must therefore ensure that we put measures in place to enable each and  every individual achieve their full potential. To this end, the State Government has committed 1 % of the Consolidated Revenue as part of the Lagos State Health Fund  to be used in paying premiums for the poorest individuals and families in the state.

Other sources of funding will include local and international donors, individual  philanthropist, private organisations, and the NHIS hopefully through the Basic  Health Care Provision Fund.

“The poor and vulnerable individuals will be identified through a transparent and  scientific means testing exercise which will be carried out periodically. Therefore,  the number of lives and the productivity lost to illness will be significantly reduced.

“As I speak, we are enrolling some of the most vulnerable individuals and families in the state in the Alimosho local government area and Makoko area of Yaba LCDA. At the end of the exercise it is expected that over 15,000 individuals will be enrolled  by the scheme as a start,” he said.

Also, Sanwo-Olu lauded and congratulated Governor Ambode on the successful launch of the health scheme, assuring that the initiative would be sustained.

There were also goodwill messages from the World Bank, The United States Agency for International Development (USAID), the Government of Netherlands, PharmAccess Foundation and National Health Insurance Scheme (NHIS), all describing the health scheme as the right move to attain universal health coverage.