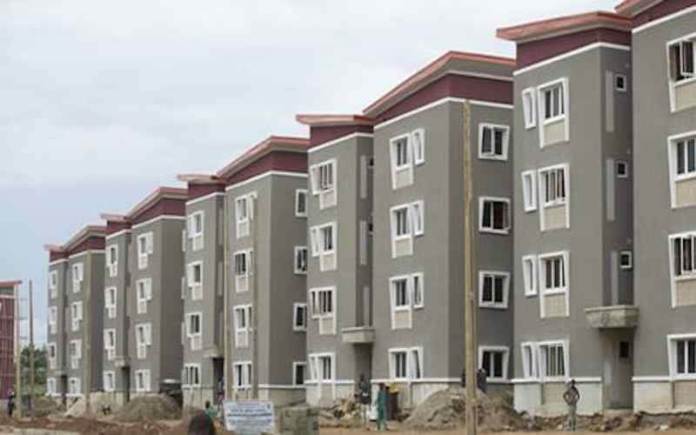 A housing estate in Lagos

In order to bridge the huge housing deficient in Lagos State, a property development firm, EchoStone Nigeria Ltd on Tuesday, delivered its first set of houses exactly 14 days from the date of commencement of construction.

The firm in collaboration with the Lagos State Government on Nov. 21, laid the foundation for speedy construction of 2,000 housing units in three Local Government Areas (LGA) of the state.

EchoStone is deploying a new technology that allows construction of several houses daily.

The firm is beginning the project to drive mass housing delivery in Lagos with the construction of 250 units of two bedroom flats in Idale in Badagry LGA.

During the ribbon cutting held at the Lagos State Vocational Education Centre compound in Agidingbi, Ikeja, where a sample of the buildings was constructed, the Lagos State Commissioner for Housing, Gbolahan Lawal, commended the efforts of the firm.

“EchoStone represent technology at its best,” he said.

He said that the houses which were constructed in 14 days demonstrated the hope technology had when used to speed up construction.

“It is satisfying to know that a 64 square metre house can be completed from scratch to bottom in just 14 days.

“Echostone is fired up to do more because of the response they have received from government. They have the funding and technological know-how to help us greatly in tackling the deficit in the state,” Lawal said.

The commissioner, who appealed for trust in the firm from the public, assured Echostone that the capital investment it had brought into the state would yield good return-on-investment for them.

He said the government was already in talks with the developer to work out a modality of deploying the same technology to assist the state in building compact storey buildings, as this was the way to go to really to accommodate Lagosians.

“We want to build compact storey buildings. We are in discussion with Echostone and they have assured us that it is doable,” Lawal said.

The Chief Executive Officer and Co-Founder, EchoStone, Anthony Rechhia, said that the delivery of the building in 14 days and handing over of the keys to Lawal, was a feat that many thought impossible.

“So, we have made the impossible possible in just 14 days,” he said.

EchoStone Co-Founder and President, Business Development, Mr Ander Lindquist, said that for the firm, it is a promise kept.

He said the firm looked forward to building more houses in the state and country at large.

Also, the managing director of the Nigerian Mortgage Refinance Company (NMRC), Mr Kehinde Ogundimu, said the company was set to remove the barrier to home ownership, provide liquidity for the purpose of achieving the goal.

He said NMRC is determined to make affordable accommodation a reality, especially, in Lagos State, where the demand acutely fell below supply.

“Beyond engaging EchoStone, efforts by the Lagos State Government, the Ibile Holdings and Lagos Homes Developers, through Public Private Participation (PPP), the involvement of NMRC to ensure that mortgage will be made available for those who needed it to buy houses will be fully supported,” Ogundimu said.

He added that EchoStone technology ws a much needed solution to the housing deficit in Lagos in particular, and Nigeria as a whole.

These problems, he noted, would never be solved if the country continued to build in the traditional way of one block at a time.

The Managing Director, Families Home Fund, Mr Femi Adewole, said that the body would engage Messrs EchoStone Nigeria, in the provision of 100,000 housing units in four years for Lagos residents, with the memorandum already in the pipeline.

“We have a product known as Home Loans Assistance put in place by the Federal Government’s social intervention to assist the Nigerian people in getting decent, but affordable accommodation.

“Besides the provision of housing, the scheme will create huge employment opportunities for the Nigerian youths.“

“This we will do in conjunction with the Lagos State Government which has shown an enormous goodwill that attracts the attention of foreign firms such as EchoStone America,”, hesaid.

On the completed prototype, an official of EchoStone Nigeria, Mr Sammy Adigun, assured that his firm would meet the housing needs of Lagos residents, with the support of all the relevant stakeholders, without compromising quality.

The the Operations Officer, Green Building Lead, Accra, Ghana, Mr Dennis Quansah, congratulated the firm for identifying the need for improvement in the building sector and for taking the bold step.

Quansah of the International Finance Corporation (IFC), said Nigeria’s future depended on how it was built today.

He said the building, which was exactly what EchoStone would build in the Peridot Parkland Estate, Idale, Badagry, was built green per the standards of IFC’s Excellence in Design for Greater Efficiencies (EDGE) certification.

“The savings will ensure that the utility bills for these housing units will be minimised and contribute to a reduction in harmful greenhouse gas emissions,” Quansah said.

He said that green buildings were not only a challenge that all must overcome together because IFC believes there were available solutions it could provide to policy makers.

Together, he said, IFC and policy makers could create an investment opportunity for developers, financial institutions and home buyers or commercial buyers or renters.

EchoStone, it will be recalled, announced a fortnight ago that it was deploying this innovative technology which allowed for rapid and scalable construction, in the construction of a 250 units of two bedroom detached bungalows in Idale, Badagry LGA.

The estate will be fitted with state-of-the-art facilities and comes at N9 million per unit. In all, it plans a construction of 2,000 housing units in three Local Government Areas (LGA) of the state — Ayobo in Alimosho LGA and Imota in Ikorodu LGA.