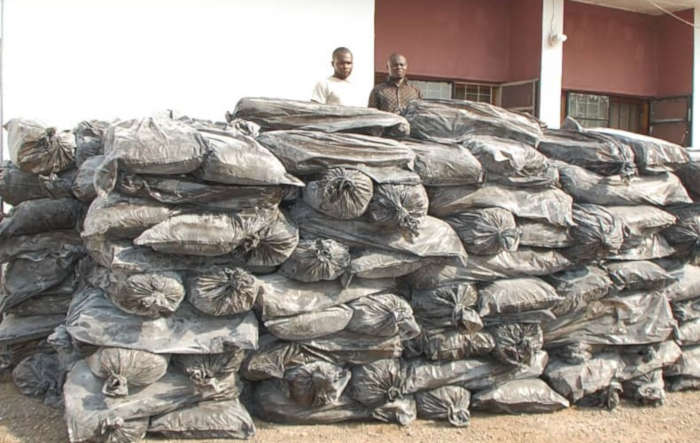 Mr Peter Adegbe, the spokesman of the NDLEA in FCT, gave the details of the arrest to News Agency of Nigeria (NAN) in Abuja.

Adegbe said that 201 bags of dried weeds, weighing 2,058.7 kilogrammes that tested positive for cannabis, were concealed in an articulated vehicle.

He said that an interim investigation indicated that the vehicle came from Ifon, near Owo, Ondo State and the bags were to be taken to Deidei, FCT, each bag’s content worth N120, 000.

He also said that two suspects were arrested in connection with the contraband.

“If these people had successfully entered FCT, those bags would disappear within 10 minutes,’’ he observed.

Adegbe said that the NDLEA interdiction operation team in Abaji engaged in the operation that resulted in the seizure of the contraband.

He noted that the officers went for the operation based on intelligence report and diligent surveillance.

“We have been monitoring the territory for some time, and I am glad that our sacrifices have been handsomely rewarded,’’ he said.

Adegbe attributed the achievements of the agency during the year to the commitment of the personnel, good working relationship and synergy between it and other security agencies in the state.

He said “the command worked hard to limit the supply and abuse of hard drugs and other psychoactive substances in the territory.

“The result is the reduction in the number of suspects and quantity of drugs seized.’’

Adegbe urged the people to cooperate with the agency by volunteering adequate information on drug dealers for prompt action.

“We are using this opportunity to call on road users, citizens to volunteer information of drug traffickers because if they do not cooperate with us, we will be at loss,’’ he said.

He assured the people that the agency would not relent in its effort to comb all nooks and crannies to rid the territory of drug dealers.

Adegbe also identified poor funding, inadequate logistics and office accommodation as some of the challenges facing the command.

He advised those who indulged in hard drugs to desist from the habit to avoid the wrath of law and adverse health implications of hard drugs.