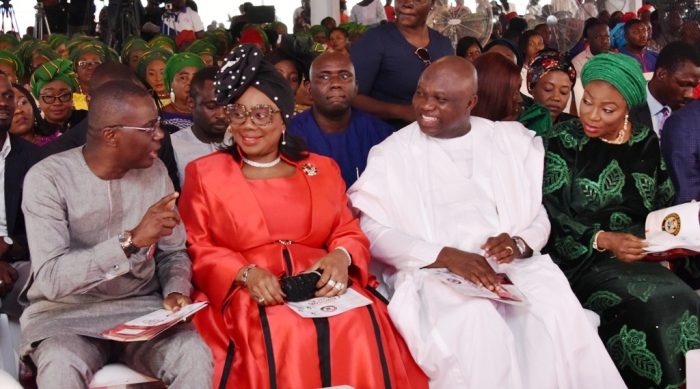 Lagos State Governor, Mr. Akinwunmi Ambode has called on Nigerians to pray for peace as the nation prepares for the 2019 general elections.

The governor spoke at the 2018 Lagos State Christmas Carol Service, held at the Lagos House, Ikeja on Wednesday.

According to him, Nigerians should use this opportunity to pray for the peace and prosperity of the Lagos State and Nigeria, especially as “we prepare for election.”

The governor said Christmas marked the birth of Christ and the coming of light, saying that the presence of light in darkness always bring transformation and restore hope to those who had lost hope.

He said there is life everywhere Jesus is, adding that whatever “we do at Christmas is connected to light. Light personifies Jesus. As light, we are to illuminate those things pertaining to Christ.

“As the light of God, we must show the way. We should use this season of love to give to the less privilege in the society,” he said.

Also speaking at the event, wife of the Governor, Mrs Bolanle Ambode charged Christians to imbibe the teachings of Jesus Christ and strive to emulate His qualities of humility, love for all, fairness, selflessness and consideration for fellow humans.

Mrs Ambode emphasised that if Christians succeeded in imbibing the teachings of Christ and stove to be like Him, Christians would do less of preaching to bring non-believers to the vineyard, “as our lives would be perfect examples and model that would convince the multitude to come to God.”

“Of course we cannot be Jesus Christ, but we can imbibe His teachings and strive hard to emulate His qualities of humility, love for all, fairness, selflessness and consideration for fellow humans, among others,” she said.

Mrs Ambode said “if God had not given Christians a chance of redemption through Christ; if He had insisted on vengeful action based on the sinfulness of the world; if God had not shown so much kindness and mercy to people of the world, what will be the story of mankind?

“It is because we deeply treasure the special love of God and appreciate the magnitude of undeserved suffering that Jesus went through because of you and me, that we have assembled here to express our praise in solemn songs.
The pains that Jesus suffered and the burden he carried for us to enjoy forgiveness of sin from God, make Him the permanent hero that we must continue to celebrate. The carol is one of the little things we can do in this regard.”

On the theme of this year’s Carol, which is: ‘The Light of the World’, the First Lady said Jesus came in His majesty to illuminate the world totally enveloped in thick darkness and that He came to redeem us from sin by pointing the way to righteousness and to eternity, saying that is why He is the light.

According to her, despite Christ’s awesome glory, He came into the world with disarming humility, reflected in His carriage, interaction and all that He did, as He toiled and served to save, so that precious souls would not perish, adding that in the end of it all, He died but gloriously resurrected, so that His mandate for humanity would be fully accomplished.

According to her,” imagine what the world would be if everyone had the qualities of Jesus Christ. It would be a world without hate and violence, where love reigns supreme, ensuring joy, peace and complete harmony, among all people and all nations.”