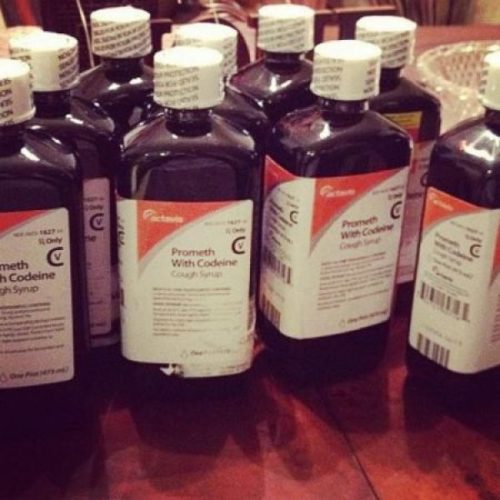 Some cough syrup with codeine

The Minister of Health, Prof. Isaac Adewole, on Tuesday said no fewer than 2.5 million bottles of codeine had been recalled from circulation across the country by the Federal Government.

The Minister made this known in Abuja when the Presidential Advisory Committee on Elimination of Drug Abuse (PACEDA) visited the ministry on advocacy.

The News Agency of Nigeria (NAN) recalls that the committee was constituted by President Muhammadu Buhari to help those enslaved by hard drugs to build new lives.

Adewole said that the ban on the production, distribution and sale of hard drugs had helped in curbing their menace.

‘Since we banned Codeine syrup in the country, till today, over 2.5 million bottles have been recalled, and we will not relent in ensuring that this menace is curbed to the barest minimum.

“Drug issues are not restricted to Northern parts of the country.

“I consider this event a worthwhile investment and a clarion call on all of us to rise to the occasion to save lives and restore the dignity of man.

“When I see people talking about the Northern part as the most dangerous when it comes to drug consumption, I will say, the South-West states are not left out.

“The drugs commonly abused in Nigeria include cannabis, codeine-containing-medications, tramadol and other opioids, benzodiazepines, cocaine and heroin.

“But, it is shocking to know that Nigerians have moved from taking cannabis sativa, popularly known as marijuana, to some other bizarre substances.

“Lizard excrement, latrine fumes, rubbish dump fumes, paint fumes, gutter fumes, dry cow dung are being consumed. There are others yet to be identified substances that are also abused.

“I must say that setting up this committee is a good move to curb this menace in our country,” he said.

The minister described the escalation of drug abuse in the country as worrisome, and urged the committee not to only look at the issue of codeine but also the bizzare substances abused in the country.

“The need to educate the people on the dangers of drug abuse has called for concern since they have moved to sniffing those bizzare substances.

“We must also look at how to rehabilitate and reintegrate them into society to become better people in the nearest future,” he added.