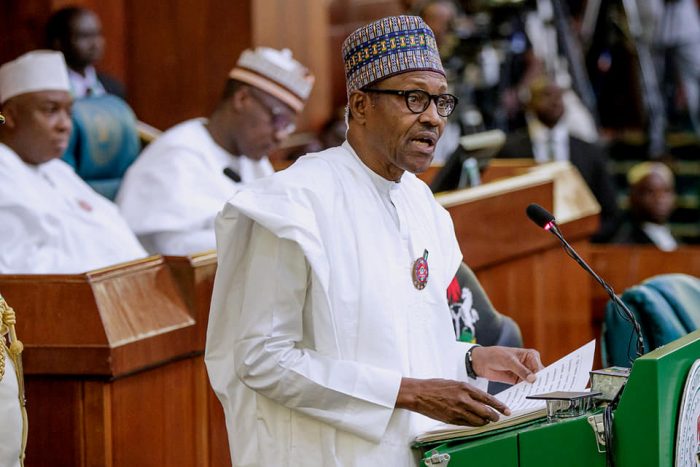 President Muhammadu Buhari: PDP supporters say his integrity is questionable over the acquisition of Etisalat and Keystone Bank

The Buhari Osinbajo Hope Movement ( BOHM) on Thursday lauded President Muhammadu Buhari over the proposed a budget of N8.83 trillion for 2019.

The National Coordinator of BOHM, Seyi Bamigbade who stated this while receiving members of Atiku Grassroots Foundation in Abuja into their fold noted that the size of the budget the areas of priority mirrored in the budget showed the determination of the Buhari led government to boost the economic prosperity of the country.

Bamigbade said he listened to the presentation of the 2019 budget by President Buhari and found it to be full of hope and development.

He said, “the budget presented by the president shows that the proposed recurrent expenditure is N4.04 trillion, statutory transfer is N492.36 billion, there is a sinking fund of N120 billion, while capital expenditure is N2.031 trillion.’’

“The president has done very well and that is why we are seeking his re-election. Many other groups have come to join us in this quest to mobilize for votes for him. I believe by the time N2.031 trillion is further expended on capital development all of us will see the development and transformation of the country.’’

Bamigbade condemned in the strongest terms, the un-parliamentary conduct of some members of the National Assembly at the presentation of the 2019 appropriation bill by President Muhammadu Buhari.

He described the gangster and unruly behaviour of some irresponsible members of the National Assembly as an abuse of legislative privileges and a desecration of the sanctity of the hallowed chambers which is a temple of civility and honour of law making.

BOHM leader noted that the attitude of the lawmakers was at variance with the civility and responsibility of the Nigerian people which they are supposed to mirror in conduct both within and outside the hallowed chambers at all times.

He lauded and appreciated the maturity, responsibility, fatherly comportment, statesman and Presidential conduct of President Muhammadu Buhari in remaining calm and composed in the face of the unprovoked hostility and aggression by the irritant legislators.

He admonished them to be conscious of their office and image as supposed lawmakers in the eyes of the world.