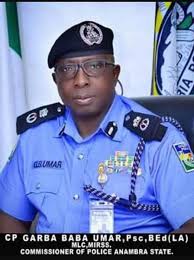 The Anambra Commissioner of Police, Mr Garba Umar, has directed all Area Commanders, DPOs and Unit Heads of the force to intensify raids on black spots in the state.

Umar gave the order in a statement issued by the command and made available to the News Agency of Nigeria (NAN) on Saturday in Awka.

He also said in the statement signed by the command’s Public Relations Officer, SP Haruna Mohemmed, that the ongoing stop-and-search operation in the state should be sustained.

The police commissioner warned the personnel attached to VIPS to adhere strictly to the rules guiding use of firearms and refrain from unauthorised sporadic shootings in the air.

He explained that sticking to the rules would enhance safe and secure environment for all during the Christmas and New Year celebrations in the state.

Umar urged his officers and men to also carry out night patrols in order to deny miscreants and criminal elements the opportunity to operate.

He further directed the Department of Operations in the command to embark on statewide round-visits to observe levels of compliance with his directives.

”Consequently, all officers in the Command are placed on red alert at their respective duty posts and directed to respond promptly to any situation or distress calls from members of the public,” Umar ordered.

The commissioner of police warned that any officer found violating the order would be dealt with in accordance with the laid down procedure.

Umar equally appreciated the cooperation of Anambra people with the police so far, and urged them to continue to avail the command with useful information that would help in promoting safety in the state.

He further assured the public of adequate protection and implored them to report any suspicious person or movements to the nearest police station or call police emergency number, 07039194332, for prompt response.