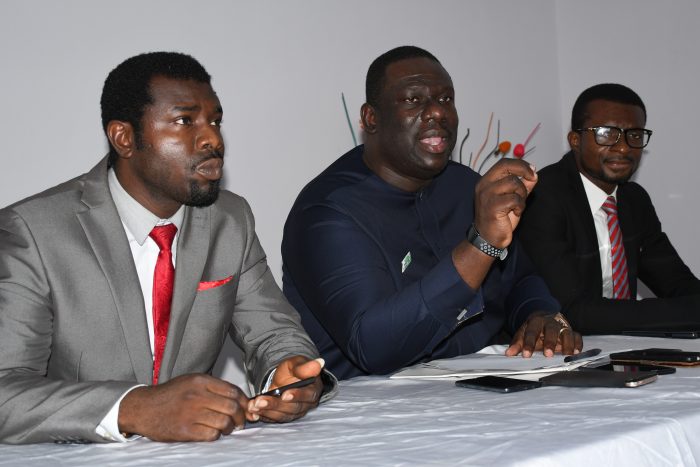 The Group Managing Director, CFL Group, Lai Omotola has said the nation’s economy is dangerously moving towards the precipe.

Motola, who spoke in Lagos during an end of year interaction with newsmen lamented that the nation’s economy had nose-dived in the last few years, saying that pragmatic efforts must be put in place if it must get back on its feet again.

In his words: “To state that our economy is challenged is an understatement and the truth of the matter is that our economy is dangerously moving towards the precipe. Every nation depends on a strong economy to have peace and Nigeria cannot be an expectation.”

The business mogul said the current economic challenges the nation faced was caused by four ministers plus a governor.

According to him, the economic model adopted by the Minister of Finance could not bring economy prosperity based on a cut and paste of International Monetary Fund, IMF and World Bank economic model, as the model was hinged on heavy investment on infrastructure.

“In as much as this is good, the impact on our economy has been little. The problem is that we can not just say to ourselves that by just doing one thing the economy will come out better and when you listen to this government reel out her achievement, the first thing they mention is infrastructure. Secondly, there is no synergy between the Minister of Finance and the CBN Governor,” he said.

Omotola also stated that for the nation to achieve a buoyant economy, it must possess the ability to move persons and goods without hinder, as transportation must be seamless, integrated and efficient, while lamenting that the only thing “we hear from ministry of transportation is rail and yet major rail projects that will catapult the economy remain comatose and we have embarked on rural rail projects that can’t be seen by urban people that contribute majorly to the GDP.

“Look at the blue line in Lagos, the light rail project from Okomaiko to Marina, one would have thought that the Buhari’s government that destroyed the metro rail would have compensated Lagosians by helping to complete the light rail project. Take a look at the rail corridor at our port. The port that brings the most revenue and all we see are rhetorics and drama. For close to four years, there is no transportation reform and no master plan.”

As for the Minister of State of Petroleum, Omotola recalled that Kachikwu had told the country that the refinery would start work in six months and that one refinery had in deed commenced work, but decried that the nation’s refinery remained comatose, with the nation still in the subsidy regime, which he described as a fraud.

On works, power and housing, Omotola said one person could not handle the three ministry that are highly technical, saying that Fashola continued to deceive the nation on the Lagos Ibadan expressway, adding that it could not be explained why government would spend money on such a lucrative route that should have been done under the Public-Private Partnership, PPP agreement.

“This minister can’t complete the second Niger Bridge. The minister is suppose to be on the front seat to rescue this economy but he has perfected ways on how to deceive the people and the government through projects that are more of social sentiments than economic benefits. It’s a shame today that Apapa port remains where it is, resident have to stage a protest. He has failed on housing and this is not new because he failed during his tenure as governor,” he stated.

On the CBN governor, Omotola said  the nation had realised that the appointment of ex-bankers as governors of central banks had not been able to help the economy, as  they had a mindset of leaving the core agenda of the CBN, which is monetary and regulatory issues, but have delved into competition with banks in doing the business of lending.

“Today, CBN has intervention in almost every sector of the economy from real estate, to power, aviation, agric and so many others with little impact. The CBN is now fully lending to businesses instead of the banks and more recently the CBN announced to set up micro-finance banks in 774 local governments. Is this not going back to the peoples bank days?” He asked.

Omotola opined that government’s policy had crowded out private sector-led economy and taken a lead role in doing business instead of allowing the economy to be private sector driven “not knowing that the wealth of the citizens is the wealth of the nation. The purchasing power of people have been greatly eroded and today our economy has been reduced to a pedestrian/penchant economy as exemplified by trader moni of N5,000,000.00.”