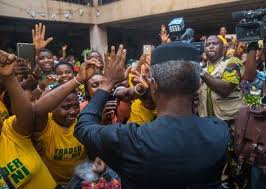 Traders at the popular Ogbeogonogo Market, Asaba, hailed Vice President Yemi Osinbajo on arrival at the market in furtherance of the Federal Government Enterprise and Empowerment Programme “TradersMoni”.

The News Agency of Nigeria (NAN) reports that the Vice President, who had earlier visited Warri, arrived Asaba, the State Capital, at about 6 p.m. and walked round the market amidst hailing by the traders.

Earlier, the petty traders, who received the TradersMoni, lauded the Federal Government for the programme.

Those who spoke with NAN said that the loan would be effectively utilised to improve their trade and pay back early enough to attract more loan.

Mrs Chinwe Ayasi, a petty trader, said their lives would have been better than what it was If other past governments had impacted on them in the like manner.

“I sell vegetables, tomatoes, other food sources in small quantities to keep my family going and government came yesterday to register us and after that my account was credited with N10,000.

“I say ‘God go’ bless them; if that was how other past government had impacted us, our life would have been better.

“For this, I will use the money to increase my trade and they advised us to pay certain amount weekly to enable us complete the payback of the loan in six months.

“They also said that if we pay back on time, we can get more money to increase our trade, so, my plan is to work hard to pay it back in three installments to finish payment on time and to collect another,” She said.

Another trader, Mrs Christiana Onyenbu, who sells palm oil, other food ingredient on makeshift table at the market, said that she was registered this morning (Friday) and shortly after, N10,000 was credited into her account by government.

She said that it was a soft loan by the Federal Government and that all beneficiaries must pay it back.

On her part, Miss Favour Emmanuel, who sells mellon on a wheelbarrow, said she was registered on Thursday at the market.

“They came and told us that the money is to support our business and this morning they came back and requested for our account and they transferred N10,000 into my account.

“I am very happy and I say God bless Nigeria,” she said.