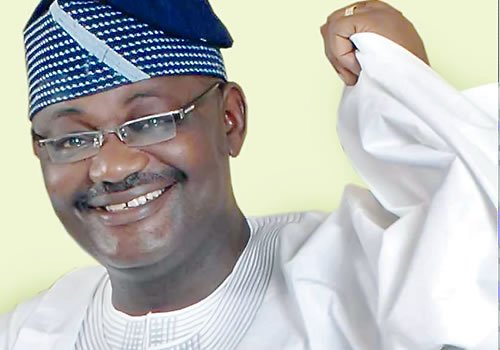 Oba Dosunmu said this during the governorship candidate’s visit to his Palace to rally support ahead of the 2019 polls.

Describing Isiaka as a “general of the national interest” (GNI) , the monarch lauded him for his competence and capacity, insisting that the two-time governorship candidate would win the 2019 election.

“I am forseeing that GNI is going to represent Ogun State well at all levels, if he becomes Governor. I respectively call him our Governor. By God’s grace he will be the next Governor of Ogun State. I will continue to pray for you, and take note whoever receives prayers in Owu Palace is always successful.”

“Wherever you go, you will be loved dearly, and people will work towards your political success. Gboyega Isiaka is a known successful man, who is also competent, and his consistence to rule is an indication of his love for the state. We should consider his consistent struggle”, the monarch stated.

While leading the conduct of prayers for Isiaka, Oba Dosunmu appealed for the recognition of the traditional institution in Isiaka’s administration,saying traditional rulers play pivotal roles in moral values orientation.

Oba Adegboyega appealed to him not to forget the people when he becomes governor. The monarch also prayed that Isiaka, akin to President Muhammadu Buhari who became President after three failed attempts, will win the election in 2019.

Responding, Isiaka appreciated the support of the Olowu alongside other monarchs in Owu kingdom, even as he promised to take the State to greater heights if elected in 2019.

He also appreciated past governors of the state and the incumbent especially for the infrastructural development in Abeokuta, the state capital, noting however that the State has enough resources to create a life of abundance for the entire citizenry.

“As your son, I am here to inform you my father’s that I will be contesting for governor of Ogun State in 2019. I am also here for your prayers. I am contesting again in 2019 under the ADC. I believe that there is something God wants me to add to this state. Our state is very great in all ramifications. There’s no part of the state that you can’t get human resources, human capital, and natural endowments. We have been able to put together an economic blueprint that will usher in a world of abundance for our good people.

“We thank all our governors who have governed this State from its creation till now, but i must say that we are far from where we should be considering our potential and the enormous resources in the state. My aim is to achieve those additional edges so that we can leave our State better than we met it.” he said.

While reeling out his plans for the State, the governorship candidate identified quality and affordable education, quality health care, job creation, infrastructural development, adding that the good people of Ogun State will enjoy a life of abundance under his watch

“It is not enough to have a beautiful manifesto, what is important is the heart of the man that wants to lead. I have been in public glare since 16 years. I want to serve this state because I believe this state can move forward.”

“All those that have governed us since 1976, have all tried their best. They have performed to the best of their abilities and capacity. Our campaign is themed “Greater Ogun” because we believe there are enough resources to make this State great again.”

“We are not paying any lip service to the plans and programmes on our manifesto. We promise to keep our word and create a life of abundance for our good people who in all sense of honesty deserve much better from the government. Ours would not be an anti-people government,” he submitted.

Speaking earlier, the Director General of the Gboyega Nasir Isiaka Campaign Organization (GNICO), Engr. Tony Ojesina vowed that the party would ensure that Owu kingdom and by extension Egbaland will continue to witness significant growth and development under Isiaka’s administration.