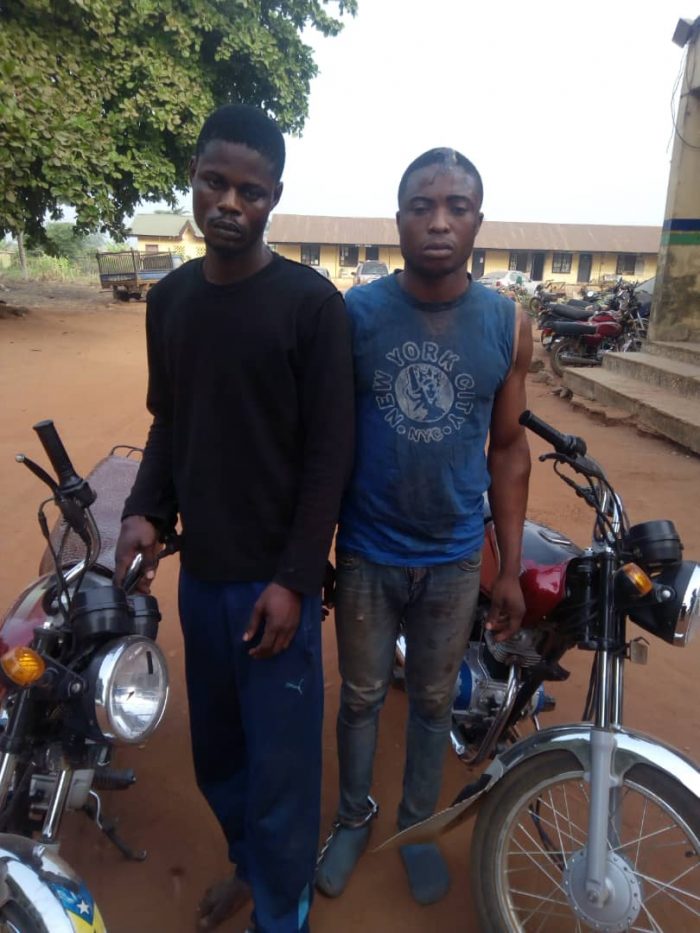 The Ogun State Police Command has apprehended two robbery suspects who specialised in snatching motorcycles from their owners around Ijebu-Ode and its environs.

“The two suspects, Oguntuga Saheed and Omotayo Adenuga were arrested following an information received by the policemen attached to Obalende division in Ijebu Ode that two Bajaj motorcycles were about to be sold at a give away price along Okunowa/Odgbolu road which raised the suspicion of the people in the area.

On the strength of the information, the DPO Obalende division CSP Hakeem Fijabi led detectives to the scene where the two suspects were promptly arrested with the two motorcycles with registration number JBD 150 WZ and SPA 272 WG.

On interrogation, the suspects confessed snatching the two motorcycles at Abeokuta road Ijebu-Ode from the owners with offensive weapons.

They confessed further to have been stealing motorcycles in the area.

Meanwhile, the state Commissioner of Police Ahmed Iliyasu has ordered the immediate transfer of the suspects to FSARS for discreet investigation.

Iliyasu commended the people of the area for giving timely information that assisted the police in arresting the suspects, adding that ”such synergy is necessary for us to have better society devoid of crime and criminality.”