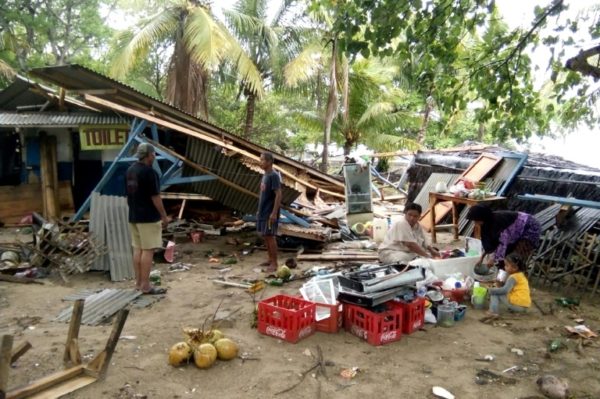 The trail of destruction left by the Tsunami

Indonesia has been hit by another Tsunami that has killed at least 62 people, with nearly 600 injured.

Hundreds of buildings were destroyed by the wave, which hit the coast of southern Sumatra and the western tip of Java about 9.30 pm (1430 GMT) following the eruption of a volcano known as the “child” of the legendary Krakatoa, national disaster agency spokesman Sutopo Purwo Nugroho said.

Search and rescue teams were scouring rubble for survivors, with at least 584 people injured and twenty reported missing across three regions.

Images broadcast on television showed the wave pushed a tangled mess of corrugated steel roofing, timber, rubble and flotsam inland from the coast at Carita beach, a popular day-tripping spot on the west coast of Java.

Authorities said the tsunami may have been triggered by an abnormal tidal surge due to a new moon and an underwater landslide following the eruption of Anak Krakatoa, which forms a small island in the Sunda Strait between Java and Sumatra.

“The combination caused a sudden tsunami that hit the coast,” Nugroho said, but added that Indonesia’s geological agency was working to ascertain exactly how it happened.

He added that the death toll would likely increase.

Indonesian authorities initially claimed the wave was not a tsunami, but instead a tidal surge and urged the public not to panic.

Nugroho later apologised for the mistake on Twitter, saying because there was no earthquake it had been difficult to ascertain the cause of the incident early on.

“If there is an initial error we’re sorry,” he wrote.

The wave swamped parts of the coast around the Sunda Strait between Java and Sumatra island, but was most damaging in Pandeglang district, on Java’s western tip, where 33 people died and 491 people were injured.

At Carita beach, a popular day-tripping spot on the west coast of Java, 15-year-old Muhammad Bintang described a sudden surge of water that plunged the tourist spot into darkness.