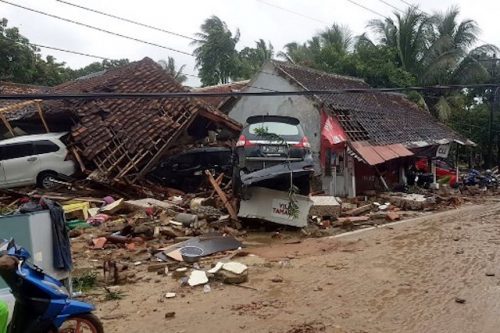 The death toll in Indonesia’s weekend tsunami jumped to 373 on Monday as search teams pushed on with the grim hunt for more corpses.

Rescue teams used their bare hands, diggers and other heavy equipment to haul debris from the stricken area around the Sunda Strait, as thousands were evacuated to higher ground.

Experts warned that more deadly waves could slam the devastated region after Saturday night’s disaster, as questions swirled over why the killer wave caught a disaster-prone country’s monitors completely off guard.

The powerful tsunami swept over popular beaches on southern Sumatra and western Java and inundated tourist hotels and coastal settlements.

“The lack of a tsunami early warning system caused a lot of victims because people did not have the time to evacuate,” he said.

Hundreds of buildings were destroyed by the wave that left a tangled mess of corrugated steel roofing, timber and rubble at Carita beach, a popular spot for day-trippers on the west coast of Java.

Beachside cottages at one resort were flattened while the dining room’s mud-caked floor was strewn with smashed chairs and tables, utensils and spilled cups of ice cream.

“The military and police are searching the ruins to see if we can find more victims,” said Dody Ruswandi, a senior official at the disaster agency, adding that the rescue effort was likely to last a week.

Indonesia’s disaster agency initially said there was “no tsunami threat” even as the wave crashed ashore.

It was later forced to issue a correction and an apology as it pointed to the area’s lack of early warning systems.

Unlike those caused by earthquakes, which usually trigger alert systems, volcano-triggered tsunamis give authorities very little time to warn residents of the impending threat.

Experts say Saturday’s disaster was most likely caused by a moderate eruption of the Anak Krakatoa volcano in the Sunda Strait that triggered either a large and very fast moving flow of molten rock into the sea or a sudden and massive submarine landslide — both would displace large amounts of water, resulting in a tsunami.

The evidence so far suggested that a section of the volcano collapsed and slid into the ocean, triggering a tsunami, said Dwikorita Karnawati, head of Indonesia’s meteorological agency.

It was the third major natural disaster to strike Indonesia in the space of six months, following a series of powerful earthquakes on the island of Lombok in July and August and a quake-tsunami in September that killed around 2,200 people in Palu on Sulawesi island, with thousands more missing and presumed dead.

It also came less than a week before the 14th anniversary of the 2004 Boxing Day tsunami, one of the deadliest disasters in history that killed some 220,000 people in countries around the Indian Ocean, including some 168,000 Indonesians.

The vast archipelago nation is one of the most disaster-hit nations on Earth due to its position straddling the so-called Pacific Ring of Fire, where tectonic plates collide.