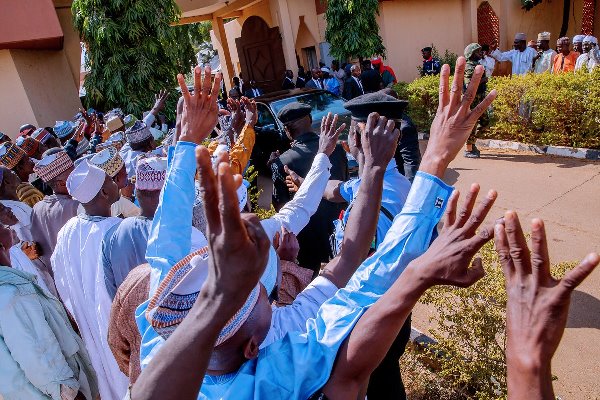 As President Muhammadu Buhari accompanied by Governor Aminu Tambuwal of Sokoko paid condolence visit to the family of late ex-President Shehu Shagari, the family of the deceased has expressed appreciation for the visit.

Alhaji Bala Shagari, the eldest son of Shehu Shagari told newsmen on Sunday in Sokoto, that the family was happy with the visit and Buhari’s pledge to immortalize the late president.

Bala, who is the District Head of Shagari town in Sokoto, however, said he would not comment on Buhari’s pledge until it was fulfilled.

Late Shagari, aged 93, died on Dec. 28 at the National Hospital, Abuja and was buried on Saturday at Shagari, his hometown.

He was dethroned in a coup d’etat that brought in Muhammadu Buhari to power as military head of state, three months after he (Shagari) was sworn in for second term.

He said that the late president did not leave any will beside the directive that he should be buried at his home, Shagari.

According to Bala, the directive was strictly observed and implemented as his remains were buried at Shagari town, on Saturday.

He acknowledged that the Sultan had offered that the late president should be buried at Hubbare, where Shehu Usman Danfofio was laid to rest.

“We acknowledged it but late Shagari had told us that he should be buried in Shagari town and even indicated a specific location, so we have to comply with his will,” he added.

According to him, his father had no grudge against Buhari or anyone because Shagari told us he had pardoned everyone.

He explained that the late president’s absence at functions was due to his ill-health, saying that was why he stayed in Sokoto and Shagari town before he died.

The visit was cheered by crowds chanting; “Nigeria Sai Maigaskiya” meaning Nigeria is for a truthful person.

The Federal Government’s delegation led by Secretary to the Federation, Mr Boss Mustspha, had earlier attended the late president’s funeral on Saturday in Shagari town.