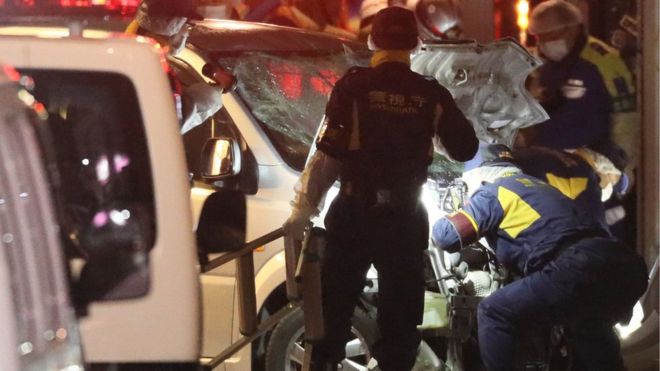 The van. Photo by the BBC

According to one of Japan’s leading English newspapers, at least, eight pedestrians were injured after a man rammed his vehicle into the crowd in a suspected act of terror during New Year’s festivities in one of the most famous streets in Tokyo.

The BBC also reports that, in the incident, nine people were injured, one seriously, by the attacker who struck in the Harajuku fashion district shortly after midnight.

The street, which was sealed off to traffic, was packed with people heading to a shrine for New Year’s prayers.

The man driving the car fled the scene but was later arrested by police for attempted murder.

The 21-year-old was identified as Kazuhiro Kusakabe.

Police told broadcaster NHK that he initially told them he had conducted a terrorist act, but then later claimed it was related to executions. It was not clear if he was referring to a specific execution or capital punishment in general.