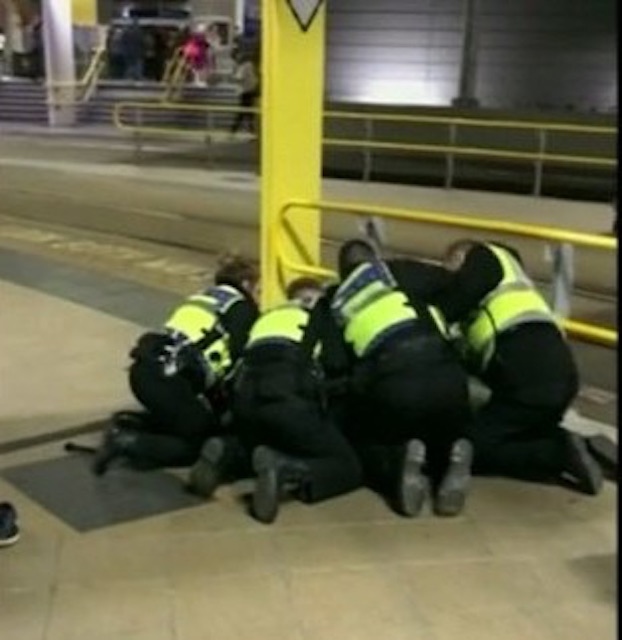 A man and a woman, both in their 50s, and a police officer were being treated for knife injuries following the stabbings on Monday evening at Manchester Victoria station in the northwestern English city.

Witness Sam Clack, 38, a BBC radio producer, said he heard the suspect shouting “Allah” before and during the attack.

He quoted the suspect as saying: “As long as you keep bombing other countries, this sort of shit is going to keep happening.”

The male suspect has been arrested on suspicion of attempted murder, Greater Manchester Police (GMP) said in a statement.

The woman suffered injuries to her face and abdomen and the man was wounded in the abdomen, while a British Transport Police officer sustained a stab wound to the shoulder.

Their injuries were described as serious but not life-threatening. The two members of the public were taken to hospital.

The incident happened at around 8:50pm (2050 GMT), when many revellers in the city would have been enjoying New Year’s Eve celebrations.

Clack said: “I just heard this most blood-curdling scream and looked down the platform.

“He came towards me. I looked down and saw he had a kitchen knife with a black handle with a good 12 inch (30-centimetre) blade.

“It was just fear, pure fear.”

Clack said police officers used a stun gun and pepper spray before, “six or seven” officers jumped on the man.

Clack said he heard the alleged knifeman shouting “Allah” during the attack.

A witness who gave her name as Rebekka told the Daily Mirror newspaper: “I heard the most blood-curdling scream I’ve ever heard and turned to see everyone running towards me.

“I jumped off the tram track and started to run down the tram lines and hid behind some concrete slabs under one of the arches.

“I was just really scared, I didn’t know if I was going to die.”

GMP Assistant Chief Constable Rob Potts said the investigation was being led by counter-terrorism police and officers were keeping an “open mind”.

“Tonight’s events will have understandably worried people but I need to stress that the incident is not ongoing, a man is in custody and there is currently no intelligence to suggest that there is any wider threat at this time,” he said.

“While we don’t yet know the full circumstances and are keeping an open mind, officers from Counter Terror Policing North West are leading the investigation.

“This is to ensure we have all the expertise available to us and progress our investigation as soon as we possibly can.”

The city’s New Year celebrations went ahead in Albert Square despite the incident, with a firework display taking place as planned, though increased security was brought in.

The city experienced a suicide attack in May 2017, when 22 people were killed and 139 wounded at a concert by the US singer Ariana Grande at the Manchester Arena.

The bomber, Salman Abedi, 22, was born and raised in Manchester.