Brazil's Defence Minister contradicts master, sees no reason for U.S military base in the country 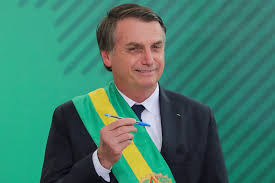 The Defence Minister of Brazil, Gen. Fernando Azevedo, has disagreed with President Jair Bolsonaro on the propriety of having a United States military base in the South-American country.

NAN reports that Azevedo told the Tuesday edition of Valor Economico, that the matter “is complex” and he had not yet discussed it with Bolsonaro.

According to him, “This needs to be carefully evaluated. I don’t see what the reason is for such a base.”

President Jair Bolsonaro had earlier expressed excitement at the prospect of having such relationship with the United States.

Bolsonaro, who took office on Jan. 1, said in a televised interview two days later that he might be willing to allow a U.S. base in Brazil as a way to counter Russian influence in Venezuela, a move that would mark a sharp shift in direction for Brazilian foreign policy.

A senior army officer told Reuters the military was against the idea.

Azevedo said in the interview, conducted on Friday, that Bolsonaro had yet to set out his plans with the Defence Ministry, the part of the government that he said would oversee any such move.