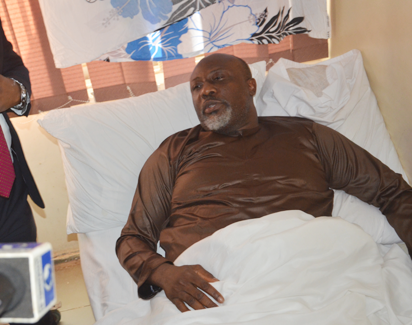 The police have said the lawmaker representing Kogi West district, Senator Dino Melaye, has been moved to the medical facility of the Department of State Services (DSS) in Abuja.

He explained that the lawmaker was indeed taken away from the Police Clinic to another government-owned medical facility after the senator and the police disagreed about his fitness to face trial.

Moshood revealed further that the police had obtained a warrant of arrest to detain the lawmaker.

According to him, the police secured the warrant from a Federal Capital Territory (FCT) High Court to keep Senator Melaye for 14 days, which started from Wednesday, January 9.

The senator emerged from his residence in Abuja on Friday last week and surrendered after eight days of police siege.

Melaye, who was later arrested, had slumped when he opened the door of his house to the security operatives in the presence of some of his colleagues in the Senate and family members.

He was initially taken to the office of the Federal Special Anti-Robbery Squad (F-SARS) before being transferred to the Police Clinic for medical attention.

Having spent three days at the medical facility, the police said the lawmaker was fit to stand trial for the alleged crimes which he was arrested.

But Senator Melaye has since insisted that he needed more treatment to be fit.

This prompted the police to move the lawmaker from their clinic to the DSS medical centre for further examination.

The lawmaker was declared wanted by the police for alleged criminal conspiracy and attempted culpable homicide which he reportedly committed in Kogi State on July 19, 2018, Channels Tv reports.