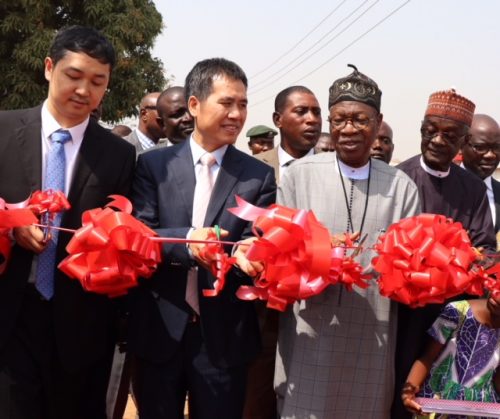 The Minister of Information and Culture, Alhaji Lai Mohammed
(second from right); The Chinese Ambassador to Nigeria, Dr. Zhou
Pingjian (second from left); Chief Executive Officer of NTA-StarTimes,
Mr. Justin Zhang (extreme left) and the Director General of NTA,
Mallam Yakub Ibn Mohammed (extreme left), at the launch of the Access
to Satellite TV for 1,000 villages in Nigeria in Kpaduma, FCT, on
Monday.

The Minister of Information and Culture, Alhaji Lai Mohammed, has launched the 1,000 Villages Satellite TV Project, which is part of the Chinese government-sponsored ‘Access to Satellite TV for 10,000 African Villages Project’.

Launching the project at a ceremony in Kpaduma village, Federal Capital Territory (FCT), on Monday, the Minister recalled that Chinese President Xi Jiping announced the ‘Access To Satellite TV For 10,000 African Villages’ during the 2015 Forum on China-Africa Cooperation
(FOCAC) in Johannesburg, South Africa.

He said under the project, each of the 1,000 carefully-chosen villages in Nigeria will receive 2 sets of solar powered projector television systems and 1 set of solar 32-inch digital TV integrated terminal system.

After the expiration of the two months, he said, viewers can continue to enjoy access to the 33 channels by paying N900 per month, or enjoy limited access without payment.

The Minister said the project complements the efforts of the Buhari Administration at democratizing access to information and entertainment through the Digital Switch Over (DSO) for television which has now been rolled out in the several states and the FCT.

He urged the satellite TV implementation agency, StarTimes, to expedite the installation of the TV satellite system to cover the entire country in order to give the people opportunity to be informed on the policies and programmes of the candidates for the various elective positions in the 2019 general elections.

“The 1,000 villages project could not have come at a better time. In just a little over one month, Nigerians will be voting in the 2019 general elections. They need access to information now, more than at any other time, to know about the over 70 political parties that will be participating in the elections as well as about their various candidates,” Alhaji Mohammed said.

The Minister commended the Chinese government for the project which, he said, will undoubtedly strengthen the already very cordial China-Nigeria relations.

In his remarks, the Chinese Ambassador to Nigeria, Dr. Zhou Pingjian, who pledged the commitment of China to implementing the outcome of the FOCAC, said Nigeria and China are working closely to ensure access to information through television and satellite technology.

“StarTimes is now working to ensure access and besides access, China and Nigeria are also working very closely on TV and on Satellite. We are building the Made-in-Nigeria TV sets,” he said.

On his part, the Chief Executive Officer of StarTimes, Mr. Justin Zhang, said the implementation of the project will create more jobs as Nigerians across the 1,000 villages have been trained on how to install, recharge and operate the Satellite TV system.

Tags:   Satellite TV   The Minister of Information and Culture