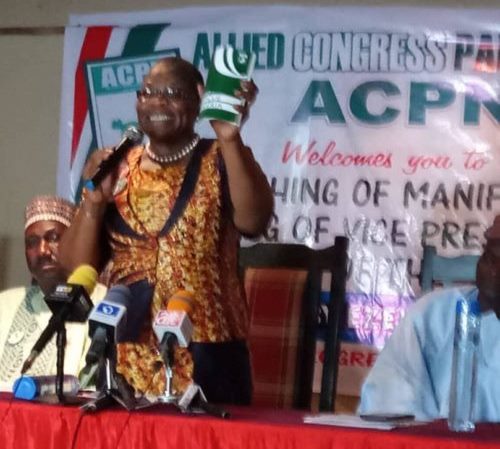 Oby Ezekwesili during the launch of party’s manifesto

Dr Obiageli Ezekwesili, the presidential candidate of the Allied Congress Party of Nigeria (ACPN), says she would chart a new direction toward making Nigeria great if elected president in the Feb. 16 election.

Ezekwesili spoke on Tuesday in Akure while flagging off her South West presidential campaign that drew party members from Ekiti, Osun and Ondo states.

She said the ruling All Progressives Congress and the Peoples Democratic Party had failed the country, arguing they lack the capacity take the country to the desired great heights.

The former Minister of Education, who described ACPN as a party of the people and committed to restructuring, said it would “steer the country out of the woods.”

“This is not a movement of politicians, this is a movement of the citizens. I am not running so that I will answer a title, I will mobilise the Nigerian people for us to do things differently.

“I will mobilise Nigerian people for us to form a government in the way that matters to the people, not for the politicians and looters but for the people; everyone in Nigeria that is tired of the situation will run with me, I am not running alone.

“We want a different Nigeria, a system that will make the child of the poor to have access to quality education.

“We will ensure that the private sector is part of the economic development of the country.

“Today, three to four million of our young people come out of schools and could not find job, that is horrible.

“The ACPN is a party that will bring new dawn on the country,” Ezekwesili said.

He advised party members to avoid the pitfall of the past and work hard as a team to ensure victory for the ACPN in the forthcoming general election.

“Let us take our destiny in our own hands. With the unity of purpose and hard work, it will be a walkover for ACPN come election time,” Galadima said.