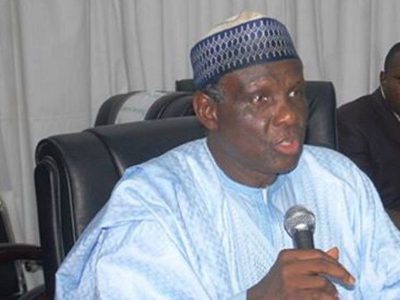 The Prof. Jerry Gana Presidential Campaign Team has decried an alleged bias by the leadership of the Social Democratic Party (SDP) against its principal in favour of former governor of Cross Rivers, Mr Donald Duke.

The Director-General of the team, Mr Ike Neliaku, said this while addressing newsmen in Abuja on Tuesday.

Neliaku frowned at the party’s refusal to submit Gana’s name to the Independent National Electoral Commission (INEC) as its presidential candidate as directed by a Federal High Court.

According to him, both leaders are acting a script other than the interest of the party, which they have manipulated thus far.

“I call on credible leaders of the SDP and our teeming supporters to rise and rescue the party from the hands of traders and merchants.

“This is not about Prof. Jerry Gana, it is about right versus wrong! It is about the destiny of millions of Nigerians whose lives have been mismanaged,” Neliaku said.

The News Agency of Nigeria (NAN) recalls that Duke had emerged SDP candidate at the presidential primaries held on Oct. 7, 2018.

Gana, a former Minister of Information, who contested the ticket with Duke, instituted a case against the result at the Federal High Court in Abuja.

On Dec. 14, the court presided over by Justice Hussein Baba-Yusuf delivered judgment in favour of Gana, declaring him as the right SDP candidate and directed the party to forward his name to INEC.

However, when the commission published the full list of c
leared presidential and vice presidential candidates on Jan. 17, the column of SDP was left blank, with remarks “court order’’ and “party yet to submit name of candidate

Neliaku stated that INEC acted as a law-abiding commission by dropping the name of Duke and expecting the SDP to obey the same court order by forwarding Gana’s name.

He said the refusal of the SDP leadership to forward Gana’s name to INEC did not enjoy the backing of other members of the National Working Committee (NWC).

“We understand that Falae’s preferred candidate, Duke, did not come to the SDP with the intention to really contest for presidency. We say so for a number of reasons:

“There is no trace of evidence nor record anywhere in the custody of the party to show that he paid for his nomination form.

“But Gana paid N11 million as required. Yet, there was an insider dealing to dash Duke the party’s nomination form while others had to pay.

“Duke never contributed anything, whatsoever, to the party.

“He was arranged to come into the party about three weeks to the National Convention and the ticket was handed over to him,” the director-general said

The SDP National Publicity Secretary, Mr Mohammed Alfa, reacting to the development in an interview with the News Agency of Nigeria (NAN) said that the allegation is left to Falae to debunk.

Alfa said what he knew was that majority of the SDP NWC members had insisted that the National chairman should complied with the court order, but they were yet to get Falae’s response on why he failed to comply.

“We don’t know why he has not complied. As I speak we have written another letter to him through the Deputy National Chairman to as matter of urgency to deliver the name of Gana to INEC.

“So, if majority of NWC members are insisting that the court order must be obeyed, and the Gana’s team is accusing him he should respond.

“What we know is that the rule of law must prevail and that can only be done by obeying the ruling of the court ordering the party to submit name of Gana to INEC,’’ he said.

Alfa said since INEC has obeyed the court by not recognizing Duke, it is now left for the party to also comply in the same manner.