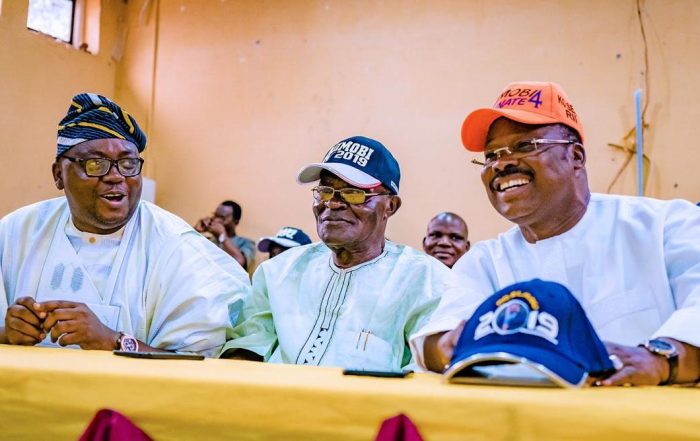 Governor Abiola Ajimobi of Oyo State has said that the Southwest would reciprocate President Muhammadu Buhari’s kind gestures to the region by ensuring that he gets a landslide victory in the February 19 presidential election.

Besides, the governor said that Buhari’s overall impressive performance across the country since coming on board was enough reason for the people to vote for him for a second term.

Ajimobi, who is also the All Progressives Congress candidate for Oyo South senatorial district in the coming election, declared this during a meeting with 67 interest groups in the state, in company with the APC governorship candidate, Chief Adebayo Adelabu, and party chairman, Chief Akin Oke.

Apart from keeping faith with an illustrious son of the region, Professor Yemi Osinbajo, as his running mate, Ajimobi said that Buhari has done for the Southwest what had eluded the region under the 16 years of the Peoples Democratic Party leadership.

The governor said, “Buhari is not a match for other candidates in the presidential race. This election will indicate if Nigerians really want progress or retrogression. You cannot compare a lion with a cat, although they are both in the cat family. It will be an election between light and darkness; an election between pig and cattle egret. It is an election between integrity and corruption. After 16 years of looting, they have come back like nothing has happened. They abandoned the most important road in the entire Southwest, if not the country, Lagos-Ibadan expressway for 16 years, Buhari came and started fixing it. He started the light rail project along the same axis and it is almost completed.

“I trust our people. They are the most sophisticated when it comes to politics, so they have made up their minds. They will vote Buhari and he will record a landslide victory in the Southwest. We will reciprocate these kind gestures”.

He continued, “Our unemployed youths are getting N30, 000 monthly under the N-Power programme, the Trader Moni is addressing the needs of the ordinary traders, the school feeding programme is feeding millions of pupils across the country every day. When we governors could not pay salaries as and when due, he bailed us out on several occasions without discrimination. How can we leave a man with such altruistic gestures and follow those who put us in a mess”.

The governor urged the people of the state to give Buhari another tumultuous welcome to Ibadan on Saturday and make him dance again like he did when he was received by an unprecedented crowd of APC supporters in Ibadan in 2015.

He also solicited support for all APC candidates in the coming election, including the party’s governorship candidate, whom he described as the most capable, efficient, effective and brilliant among those jostling to succeed him.

In his own remarks, Adelabu appealed to the people of the state to support him in the race for Agodi Government House to enable him to consolidate on Ajimobi’s achievements, especially the enthronement of peace and security.

He stressed that the National Leader of the APC, Asiwaju Bola Tinubu, laid a solid foundation for the development of Lagos when he ruled for eight years, which he said successive progressive administration built upon.

Adelabu said, “God raised Tinubu for Lagos State in 1999 and he handed over to another progressive and the chain has continued till today. That is why Lagos has developed beyond everybody’s imagination. I’m appealing to the people of Oyo State to also vote for me to succeed Governor Ajimobi, who I can safely describe as our own saviour in Oyo State since 2011. He came to free us from PDP bondage. Oyo was on trial and error before his emergence. He has touched every sector and brought peace and security to our state. That is why our state is developing. The Arabs have oil money, but they are not as developed as Europe and America because there is no peace in their domain. I’m the first son of continuity in Oyo State and I’m seeking your support. I thank my father, my leader and my mentor, Governor Ajimobi for reposing confidence in me. I will not let the people of Oyo State down. All stakeholders will be adequately taken care of.”