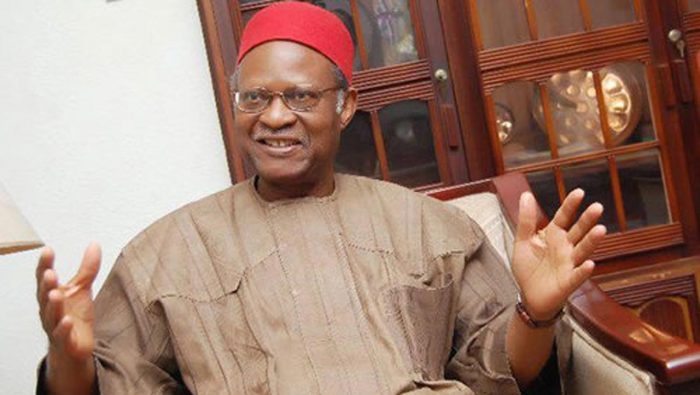 A former Secretary-General of the Commonwealth, Chief Emeka Anyaoku, on Tuesday urged the Federal Government and the relevant institutions to ensure that the February and March elections are free and fair.

Anyaoku gave the advice while speaking at a symposium to unveil the new logo of The Nigerian Tribune in Lagos.

The theme of the symposium was “Electoral Integrity, Legitimacy of Democratic Institutions and Good Governance”.

Anyaoku said the expectations of the people and indeed the international community were that the elections would be credible.

He urged the government, particularly the Independent National Electoral Commission (INEC), the security agencies and other relevant institutions to meet the expectations.

Anyaoku said the rest of the world was keenly watching Nigeria and the conduct would determine how the country would be viewed and treated by the international community.

“As our country is preparing for the general elections in two weeks time, I have three observations to address the Nigerian government, INEC and others.

“First, Nigeria’s friends and the whole of the international community are watching. Watching the behaviour of Federal Government and its agencies, including especially the police, the army and the other law-enforcement agents, to see how far we respect the country’s constitution, the rule of law and the obligation to act well in playing their roles in respect of the elections.

“From my long experience in international politics, I must say no country is an island unto itself, especially in our increasingly globalising world.

“Therefore, our Nigerian government, like other governments all over the world, while of course guarding its sovereignty, should pay heed to the views of the international community.

“Otherwise, the country would return to the pariah status which happily exited in 1999 when it once more embraced democracy.

“My second observation is that INEC had earned deserved compliments for its commendable handling of the last gubernatorial elections in Ondo and Anambra States.

“But it must be admitted that it attracted criticisms for its conducting subsequent similar elections in both Ekiti and Osun.

“I urge INEC to remain aware of the fact that the credibility of the results of our forthcoming elections will depend on the level of impartiality and transparency it demonstrates in ensuring all aspects of the elections are free and fair, thereby making the results to truly represent the will of the people.

“Indeed, the image and standing of our country within the international community will be significantly affected by how INEC and the Federal Government as a whole are seen to behave in all matters relating to the elections,“ he said.

Anyaoku decried what he called the debasement of lives by incessant killings in the country, saying the problem should be tackled holistically

The former diplomat said a return to true fiscal federalism was imperative to move the country forward.

He commended African Newspapers PLC, publishers of Nigerian Tribune for its great contributions to the media industry.

Anyaoku said the contributions of the media organisation to nation-building were as note-worthy as those of its founder, late Chief Obafemi Awolowo.

He said he had no doubt the unveiling of a new logo by the newspaper would herald another chapter of service to the people and the nation.

In her address, Chairman of the media organisation, Dr Tokunbo Awolowo-Dosunmu, said Nigerian Tribune had played its part in nation-building since it was founded 70years ago.

She said the unveiling of the new logo was in continuation of the newspaper’s long-standing vision to be the voice of the people and advocate of a better Nigeria.

Presidential candidate of Young Democratic Party, Prof. Kingsley Moghalu and the Peoples Democracy Party (PDP) governorship candidate in Lagos State, Mr Jimi Agbaje, were also present at the occasion where the new logo of the newspaper was unveiled.