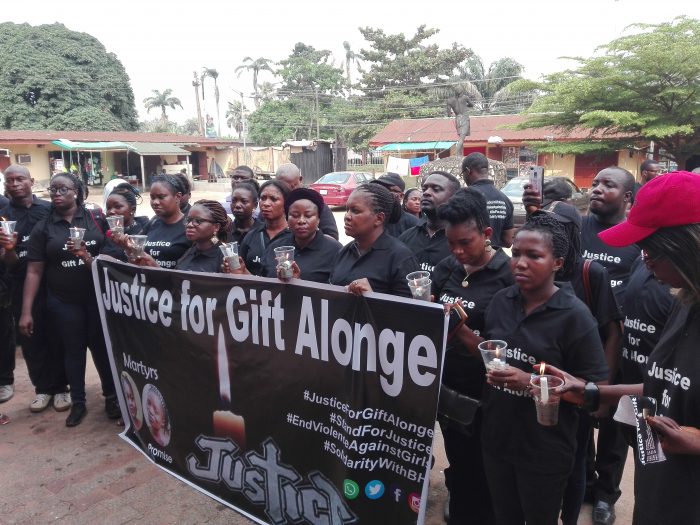 Mrs. Magdalene Ohenhen, the Commissioner for Women Affairs and Social Development in Edo State, on Wednesday raised the alarm over rising cases of men sleeping with their daughters.

She disclosed this during a protest at the NUJ Press Center in Benin, to demand justice for 17-year-old Gift Alonge, who was impregnated by her father.

The protest was organised by Lady Grace Osakue, of Brave Heart Initiative for Youth and Women (BHI).

Gift, who is now dead, was allegedly impregnated in 2017 by her biological father, Jacob Alonge, who forced her to procure crude abortion, before impregnating her again in 2018.

Mrs. Ohenhen said: “It’s a very sad situation. Edo State is becoming something else, and the earlier we stop it, the better for us. It is becoming a normal thing in Edo state for men to impregnate their own daughters.”

She said there was another case of a man who slept with her daughter for over 10 years before the case was reported.

“Men of Edo State, it’s right time we stop all these. Edo State forbids it, it is a taboo. We are begging Edo men to stop sleeping with their daughters, it is an abomination.”

Addressing journalists earlier, Osakue disclosed that Gift Alonge, her uncle, Mr. Ukere Adagbogu, and two members of BHI, Rhoda Braimoh and Promise Ezekiel, lost their lives in an accident while on their way from Igarra to attend a court sitting in Benin.

She expressed worry that the court failed to pass its sentence the same day the accused pleaded guilty, which she said made it possible for him to change his plea when he discovered that the victim and witnesses in the case died in an accident.

“At Ososo Police Division, Jacob Alonge made a confessional statement and the case was transferred to the Family Unit of the State CID in Benin. He was arraigned before court and (he) pleaded guilty to the charges.

“On 16th of January, 2019, when the court was to pass its sentence, a terrible accident occurred wherein the pregnant Miss Gift Alonge-the sexually-abused victim, her uncle, Mr. Ukere Adagbogu, two members of BHI’s intervention team, Ms Rhoda Braimoh and Ms Promise Ezekiel, on their way from Igarra to the court sitting in Benin city, lost their lives.

“The case was adjourned till 23rd January, 2019. On that day, the accused person, sensing that key witnesses in the case were no longer alive to testify, changed his plea of guilty to that of not guilty.”

Osakue alleged that the accused who is reputed to be powerful active doctor, may have used magic wand to cause the accident that claimed the lives of the victims.

In his remark, the Chairman of NUJ, Edo State Council, Sir Roland Osakue, called on the judiciary to be forthright in the dispensation of justice.

“Somebody has pleaded guilty to a plea, why was the law not applied to him on that same day?” He queried.