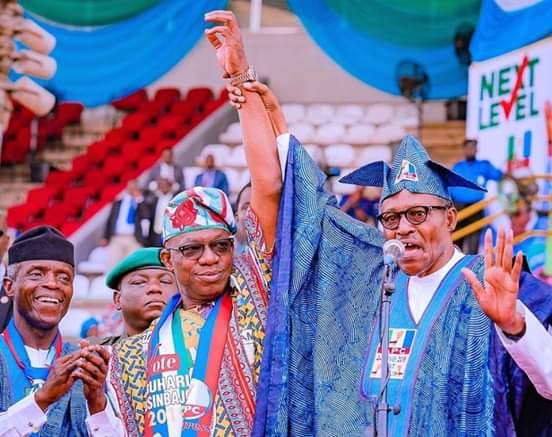 Governor Ibikunle Amosun of Ogun incredibly celebrated the near-riotous show at the Presidential rally of the All Progressives Congress in Abeokuta Monday.

A post on his Facebook page on Monday reporting on the event gloated over the ‘protests’ by members of his Allied Peoples Movement(APM) at the rally and that the National chairman of the APC, Adams Oshiomhole, former governor of Osun, Rauf Aregbesola and the director-general of the Presidential campaign, Rotimi Amaechi were ‘booed and stoned”.

Then he claimed that Asiwaju Bola Tinubu, who was instrumental to Amosun’s emergence as governor in 2011, escaped through the backdoor.

His report did not accurately reflect what transpired at the rally, where President Buhari was almost attacked by the unruly APM supporters the governor invited to the APC rally, when the president presented Prince Dapo Abiodun as the APC candidate in the state.

From TV livestreaming, the President presented Abiodun as the governorship candidate of the party, but Governor Amosun slanted his report to give the dampening side of it.

“When Comrade Oshiomhole and some party members took Prince Dapo Abiodun to the president for him to present, the president instead announced, ”for the other elections, let the people of Ogun State decide”, Amosun reported in the post, which has attracted hundreds of adverse commentaries.

The crisis rocking the All Progressives Congress (APC) in Ogun State boiled over today (Monday) when protests by party members marred the presidential campaign rally as party members booed the National Chairman of the party, Comrade Adams Oshiomhole, former Governor of Osun State, Ogbeni Raufu Aregbesola and Director General of the APC Presidential Campaign, Rotimi Amaechi. Asiwaju Bola Ahmed Tinubu, for the first time in the APC Presidential campaign, declined to make a speech at the event as he exited the venue through the backdoor as President Muhammadu Buhari made his speech.

President Buhari, as he did at the presidential rally of the APC in Owerri , Imo State, asked members of the party in the state to vote for any candidate of their choice apart from the presidential election.

Trouble started early in the rally shortly after President Muhammadu Buhari made a triumphant entry into the Moshood Abiola Stadium in company with the Vice President Yemi Oshinbajo, Governor Ibikunle Amosun of Ogun State and other chieftains of the APC.

The Director General of the APC Presidential Campaign Council, Rotimi Amaechi in his opening remarks remarked that the rally was an APC campaign, a note that was received with a resounding shout of “no”, ”no” from the stands.

The protests got louder when the National Chairman of the party, Comrade Adams Oshiomhole came on board and disclosed that his mission was to introduce President Muhammadu Buhari and the gubernatorial candidate of the party.

The disclosure sent the stands into uproar and sachets of water were hauled in the direction of the party chairman where other party chieftains were seated.

Governor Amosun had to step in to appeal to the party members to be calm and not “disgrace” him before President Muhammadu Buhari. His repeated appeals fell on deaf ears and went into crescendo as the insistence of Comrade Oshiomhole to present the party flag to Prince Dapo Abiodun, further infuriated the party members.

This led to uncontrollable heckling from the stands, forcing security men to erect a barricade around the President and other party chieftains.
When it was time for Asiwaju Bola Ahmed Tinubu to speak, Ogbeni Rauf Aregbesola, former Governor of Osun State, stepped in and his pronouncement that there were unfaithful party members at the gathering fuelled further shouts of rejection from the stands and he had to be cut short to take his seat.

President Muhammadu Buhari, apparently noting the crisis at the rally, thanked party members for turning up in their numbers to receive him. He admonished them to vote for him in the February 16 presidential election.

When Comrade Oshiomhole and some party members took Prince Dapo Abiodun to the president for him to present, the president instead announced, ”for the other elections, let the people of Ogun State decide.”