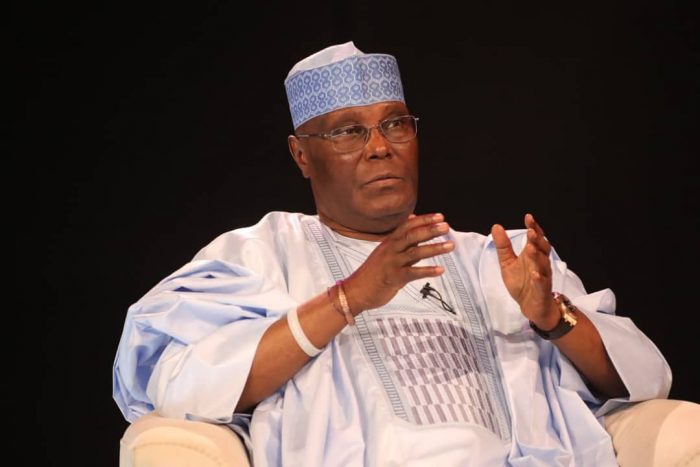 The perennial ambition of Atiku Abubakar to preside over Nigeria finally comes to a dead end this February 16, 2019. This failure is neither because of the extraordinary qualities nor the exceptional performance of President Muhammadu Buhari, Atiku’s main opponent. It has nothing to do with election rigging, as feared by the opposition camps. The imminent defeat should not be attributed to other needless underhand tactics of the ruling All Progressives Congress (APC), such as the heedless removal of the Chief Justice of the Federation or the artless death threats to foreign election observers by a sitting ruling party governor. The problem is simply that Atiku has dug his own grave, and the nail in the coffin came with super glue.

Atiku Abubakar does not need introduction. The former Vice President shares a sanctuary with a coterie of powerful Nigerian leaders, including Olusegun Obasanjo, Ibrahim Babangida, and Bola Tinubu, who are widely alleged to have acquired immense wealth through corrupt means, even though no court of law has found them guilty of such offense. This thick corruption label never deterred Atiku from a presidential dream. His most realistic opportunity came in the 2019 polls through the Peoples’ Democratic Party (PDP), a party with a corruption baggage as heavy as Atiku’s or even more. However, the former ruling party revitalized itself after an open apology and a picture-perfect primary season that suggested true atonement. Though money had influence in the presidential primary, as usual, the PDP was energized behind its nominee.

The momentum was further buoyed by the fact that Abubakar was set to face a vulnerable incumbent president, Muhammadu Buhari, an impenitent personality, plagued by poor health, a pattern of partiality, acute nepotism, incessant killings, selective justice, and growing youth unemployment, as well as mass poverty. Moreover, the ruling APC was coming out of a disastrous primary season characterized by arbitrary exclusion of qualified aspirants, lack of transparency, crass impunity, and stark arrogance; anchored by a shambolic national chairman whose every presence provokes crisis as honey attracts bee.

But the PDP balloon of buoyancy quickly crashed before any meaningful rise.

The clouds began to gather when it became clear that Atiku lacks a captivating message. His manifesto does not evoke a sense of hope capable of negating Buhari’s measurable gains in the war against corruption, agriculture, and infrastructure. Abubakar’s three cardinal points of “jobs opportunity, being united and security” are desperately banal, and his plan to achieve them is inconceivably incoherent. If he is not crap-shooting an idea to restructure the country, Atiku is hawking the notion of selling off more national assets, including the NNPC, a state corporation that generates the bulk of the nation’s revenue. It did not help matters when Nigerians were reminded that the sale of the mega oil company falls into privatization exercise like the type Atiku superintended, as vice president, in which his “friends” and family were alleged as prime beneficiaries.

The most embarrassing is Atiku’s gamble to make his contest against Buhari a referendum on integrity without anything to show for it. He started by deploying Karl Rove’s old trick of attacking the strengths of one’s opponent. The aim this time was to turn Buhari’s storied anti-corruption profile from advantage to a liability. Atiku gained good currency by refreshing the sad reality that the current war against corruption is selective. The biggest bombshell was his allegation that Buhari diverted “N1.032 trillion” meant for arms to his relatives. Mr. Abubakar saw instant admiration when he followed the charge with an open promise to “spare no thoughts in furnishing the public with details” of the allegation. Unfortunately, however, despite pressure from Buhari’s camp and the civil society, Atiku reneged on the news-breaking promise. Nigeria has penchant for imitating America’s political pattern, quite alright, but the world is not ready for another commander-in-chief who draws his strength by parading fantasies and fallacies as facts.

The nail in the coffin stuck when Abubakar muted a plan to grant full amnesty to politicians who looted our common wealth. That is, ‘Fellow Nigerians, please steal, but if you are caught, return the money and go free.’ This patent appeal for corruption is a moral miasma. Critics will counter here, and understandably so, because President Buhari has not prosecuted corrupt politicians who have returned their loot since he assumed power. But not to be lost is the fact that the president has, at least, been able to sustain a level of credibility with a constant promise that none of such looters will escape prison, eventually. It is a bad policy to shutdown Nigeria’s shop to chase criminals, as Atiku’s vice-presidential candidate Peter Obi cautioned; but, as Vice-President Yemi Osinbajo reminded us, allowing criminals to loot Nigeria’s entire stock is definitively worse. Half bread is better than none…

Nothing illustrates the apparent lack of political sagacity more than the fact that Abubakar named, as running mate, a right man in a wrong party and wrong region. Mr. Peter Obi, a former governor of Anambra State, is a very wealthy man, but his austere politics and virtues are in stark contrast to the ideals of the PDP and Atiku himself. Though this choice is popular with the Nigerian masses, the deviant political move dispirited the party leaders from Obi’s home region of the East. Since then, notable South-East and South-South PDP bigwigs have remained ambivalent. Some of them in the South-East are openly or clandestinely campaigning against their top ticket—with the hope of taking a shot at the presidency themselves, sooner in 2023, especially considering that Atiku has not been committal with his one-term pledge. On top of that, Obi took his chintzy style to the extreme by not dishing out money, the main language the Eastern electorate seems to understand. Overall, Atiku will carry the South-East and South-South zones, as expected, but an imminent low margin of victory in the party’s strong hold signals a woeful outcome for his candidacy across the country.

Adding to the conundrum is Atiku’s seemingly disregard for geopolitics. It is true that the PDP candidate adopted restructuring, an original agenda of the progressive Yoruba South-West, it is equally impolitic to have denied the people both the positions of national chairman and the vice presidency. With a Yoruba as a sitting Vice President, Atiku will fare worse than President Jonathan’s numbers in 2015, when the people retaliated for palpable marginalization of the zone in the upper echelon of the then PDP government. As for the North, Abubakar could not articulate a game-changing agenda for the peasant northern electorate that somehow holds Buhari as a folk hero. Moreover, Atiku’s vow to restructure the country is a vote-killer in the North where most are comfortable with the current structure which has handed them political advantage. Besides Benue, Plateau, Nasarawa, Taraba, Kwara, Kogi, and Adamawa—the states Atiku has good chance of victory; the rest of the other 12 Northern states belong to the Buhari column. Generally, the president will garner majority backing in North-West and the North-East zones while Atiku takes the lion share of the votes in the North-Central zone. Do the remaining math…

The 2019 presidential contest is ending as a binary election, with two analog candidates who have no clear ideology or vision for the 21st Century Nigeria. But, all things considered, Buhari comes out better and deserves to win. As for Atiku, the affable former Vice President ought to be eulogized for his ambition. But he should forever blame his presidential quietus on the failure to demonstrate any lessons learned from the 16 years of gross misrule under the Peoples Democratic Party of Nigeria, eight of which he was a very powerful second-in-command. Adieu, Lamido Adamawa!