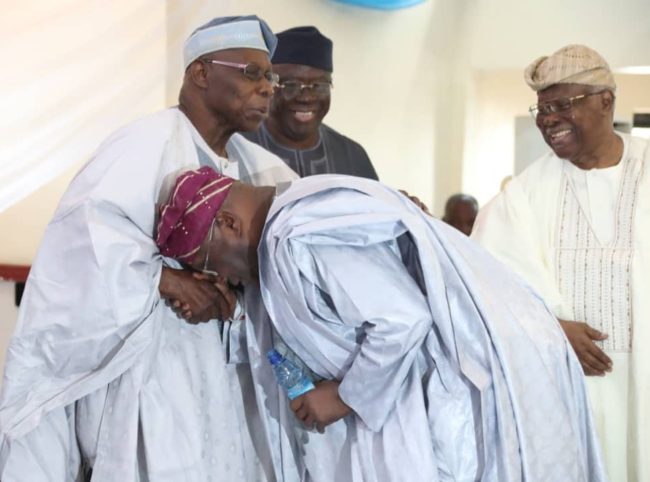 Atiku bows for Obasanjo to get his endorsement

Obasanjo had published in his memoirs a brutal testimonial about Atiku, which he said he was not retracting.

Excerpted here from former President Olusegun Obasanjo’s memoirs, My Watch, is his candid assessment of Atiku Abubakar, his former vice-president and one of the 70 plus contenders for Nigeria’s leadership throne on Saturday.

Obasanjo who now strangely backs Atiku for convoluted reasons, said at a function at Lagos Island Club last month that he stands by everything he wrote in the book.

Read the assessment before going to the polls on Saturday.

On why he picked Atiku as his vice president then:

”I considered all candidates that were available and what I knew about them. I had earlier collected information about some to beef up my knowledge of them. That night, I settled for Atiku Abubakar. Some of the reasons were: he worked hard for the project, he never indicated interest in the job to me, he had worked closely with Shehu Yar’Adua and Shehu never passed any adverse comment on him, he had been elected as a Governor which already put him on the pedestal to move up politically, but he had been short-changed in the election that would have put M.K.O. Abiola in power, and he seemed to have some national outreach. What I did not know, which came out glaringly later, was his parental background which was somewhat shadowy, his propensity to corruption, his tendency to disloyalty, his inability to say and stick to the truth all the time, a propensity for poor judgement, his belief and reliance on marabouts, his lack of transparency, his trust in money to buy his way out on all issues and his readiness to sacrifice morality, integrity, propriety, truth and national interest for self and selfish interest.

What I did not know, which came out glaringly later, was his parental background which was somewhat shadowy, his propensity to corruption, his tendency to disloyalty, his inability to say and stick to the truth all the time, a propensity for poor judgement, his belief and reliance on marabouts, his lack of transparency, his trust in money to buy his way out on all issues and his readiness to sacrifice morality, integrity, propriety, truth and national interest for self and selfish interest.

Maybe some of these traits and poor attributes are not easy to see until you work with the person concerned. And those who should tell would keep quiet so that they would not be accused of running others down. For instance, until later, when a distinguished chief from Bauchi pointed out to me the value of pedigree queried Atiku’s pedigree and blamed me for making a wrong choice, I did not pay attention to Atiku’s parental background. Furthermore, until all efforts to help Atiku change had failed – having stumbled upon a report of inquiry carried out on him – I asked one of my predecessors why he did not inform me of how bad the report was and he said that he thought I knew. He said, “This was a man I wanted to dismiss and jail but for the intervention of Shagaya and Shehu Yar’Adua.” I took him at face value. However, if his appointment was an error, I fully accepted responsibility for the genuine mistake. And knowing all that I discovered about him, what would have been an unpardonable mistake and sin against God would have been to foist him on Nigeria. My mistake was containable and it was contained…

As I moved on with my programmes for the second term, I had no clear indication about who would succeed me. If Atiku had been a loyal, faithful, dutiful and committed second-in-command, I would not have doubted. After all, I picked him purposely for that in mind. What informed my position was the question my Chaplain, Rev. (Dr.) William Okoye, asked in the beginning of May 2006 about who I had anointed to succeed me, since we were almost one year away to the election. I told him no one yet. He was curious but he believed me. We moved on as all sorts of clouds started to gather around Atiku if not at home, surely in the US, with his newly acquired wife to complete his total Nigerian husband outlook. – Yoruba, Hausa, Fulani and Igbo wives. Here, he achieved Federal character. In addition, he acquired indiscriminately chieftaincy titles all over the country. By 30 May, I told Revd. Okoye, at a morning devotion session in my residence that I wanted to embark on one month fasting and praying in June for God to show us (PDP) how to proceed in getting a successor candidate. He joined me in the fasting and prayer with some other members of the Red Carpet Prayer Group. Within three weeks of our fasting and praying, we received a letter dated 22 June 2006 written by the US Department of Justice Criminal Justice Office of International Affairs, which was brought to me by Nuhu Ribadu, the Head of EFCC, requesting us to investigate a number of Nigerians for suspicion of criminal activities in the US.

Atiku Abubakar’s name was among the names sent to us. Up to that time, EFCC had enjoyed a close cooperation and collaboration with law enforcement agencies in the UK and the USA. I gave the green light to Nuhu for the investigation as requested by the US Authorities. He carried out the investigation and forwarded his report to the US. The report was a bit uncomfortable and unsavoury for Atiku and his associates. I thought it was bad enough that the Vice President of the Federal Republic of Nigeria was under investigation for corruption, when my Administration had made fighting corruption one of its cardinal objectives. As it turned out, the investigation in Nigeria and in the US led to Atiku’s house being searched by the US Bureau of investigation (FBI), the arrest and detention of his newly married wife, Jennifer. She was also declared wanted at one time. It was so embarrassing for our Administration and Embassy in Washington under Ambassador George Obiozor.

I believed that Atiku, for reasons not unconnected with the investigation, ceased from going to the US and put up his expensive house in an exclusive area of Washington DC, for sale. He bought the house early in our administration, and I blamed him for his poor judgement, though he tried to justify it by saying that he sold a smaller one to buy a bigger one; all the same, the timing was wrong. Congressman Jefferson eventually went to jail.

What that request for investigation from the US did was start a process of elimination in the transition process. Since Atiku did not raise or discuss any issue concerning his matter in America with me except what I read in the local and foreign newspapers and reports, I did not ask him about anything. By then, I had come to know Atiku for his connivance in covering up and not being straight forward on matters requiring truth and candour. On a number of occasions, I had told him to his face that I saw him differently from Shehu Yar’Adua, who was partly his political mentor and my second-in-Command during my military administration. Shehu would never lie to me. Atiku would look at me in the face and say no when the answer should be yes. I found it curious and inexplicable. After I had confronted him on a number of occasions, inviting my Chief of Staff, Abdul Mohammed, to witness by joining the two of us to iron out some of his dubious actions. After I reported him to his father-n-law, the Lamido of Adamawa, I gave up on him. He believed that denigrating me with his battery of media men and women was the surest way to succeeding me. I wished him well and moved on.

On a number of occasions, I had told him to his face that I saw him differently from Shehu Yar’Adua, who was partly his political mentor and my second-in-Command during my military administration. Shehu would never lie to me. Atiku would look at me in the face and say no when the answer should be yes. I found it curious and inexplicable.

Sometime in the fourth quarter of 2004, an associate of Atiku came to my residence at the Aso Villa from Atiku’s official residence. He felt uncomfortable and I tried to make him feel at ease. Then, he settled to tell me the story of what had just transpired in Atiku’s residence. I listened with rapt attention, He went on to say that Atiku told him that for him to become the President of Nigeria, the 2007 elections were only a formality. The seven ingredients he needed for his enthronement were already in his hands. He controlled the National Assembly because both the President of the Senate and the Speaker of the House of Representatives were in his pocket. He controlled, twenty-eight out of thirty-six Governors. He had control of the media. His influence over the judiciary was overwhelming. What he needed was foreign endorsement and for that he had employed two lobby groups in the US and one in the UK. And finally, the money for the elections was in the purse. When the man finished, I thanked him without passing any comment. The man was surprised at my reaction and asked, “You have nothing to say to these?” I said I had nothing to say and I immediately called my ADC, Chris Jemilola, to play a game of squash with me. On our way to the squash court with my ADC, I said, “People at times make plans and leave God out of their plans.” My casual remark struck Chris and he said, “Sir, that was a profound statement”. I said that I made the statement because of what I had just heard of Atiku’s plan. I was not convinced he had put God in his plans. Atiku was confident and God was laughing.

Most of Atiku’s ingredients soon started to fall out of place one by one. The first was the party, PDP. He thought I was powerless and had no clue about the execution of his plan with his group; part of his attack on me was for National Chairman of the Party to give the first salvo, then other things would follow as his grip on the Party would be firm and consolidated. That salvo came in the form of a letter to me from the Chairman of the party, Audu Ogbeh, who had fully defected with Ayu to Atiku. The letter, which was not the product of any issue or matter discussed with or at any party meeting, came suddenly. When I received it, I could read the sinister intention behind it. And I told Remi Oyo, my media person that the letter would be out in the media within the couple of days. Remi doubted it would happen. Nevertheless, I spent that night writing my reply and I sent it in the morning. My reply was clear. I wondered why Atiku and his group did not realize that with my reply, the battle line was clear or maybe they thought that the seven ingredients would remain intact to the end.