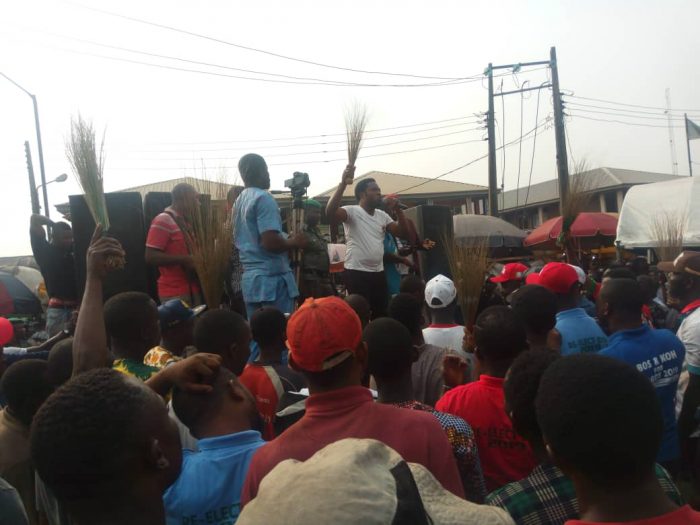 Traders at the popular Ladipo Auto Spare Parts Market in Mushin area of Lagos are mobilising massively to ensure the emergence of the All Progressives Congress, APC, governorship candidate, Babajide Sanwo-Olu as the next governor of the State in the March 2 poll.

Hundreds of traders embarked on sensitisation campaign around the market on Wednesday calling on other traders to vote for Sanwo-Olu for the betterment of their welfare.

Spokesperson of the traders and convener of the campaign, Chris Onyekachi said Ladipo traders must come out to vote for Sanwo-Olu in next month’s governorship election in Lagos as the traders believed that he would do well.

He said sitting at home would not help the traders, but that when they exercise their franchise, they would be able to vote massively for the emergence of Sanwo-Olu.

“We believe in Sanwo-Olu and we have educated our people to collect their PVCs and many of them have collected. We have been educating them in several meetings and today, we are on ground to create awareness on the need for them to vote this weekend and in the governorship election next month.

“This is Lagos State and this is where we do our business. We have to do what is right and sitting at home will not help us. Vote for Sanwo-Olu in next month’s election,” he said.

He said in 2015, the traders refused to vote for Ambode, but that the governor surprised them by keeping to his promise that he would not close down the market during his tenure and also had good relationship with the traders.

Nwankwo said Sanwo-Olu had also promised them that he would not shutdown the market during his tenure and that the traders believed him.

He said there were about 400,000 traders in Ladipo Market and that they were ready to cast their votes for Sanwo-Olu in next month’s governorship election.