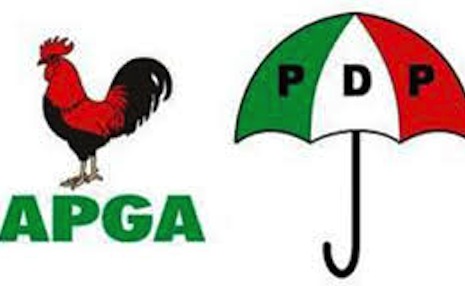 Grand Alliance (APGA) in Abia says it has uncovered the Peoples Democratic Party’s (PDP) grand plot to rig the general elections in the state.

The state Chairman of the party, Mr Augustine Ehiemere, said this while briefing journalists in Umuahia on Sunday.

Ehiemere, who was represented by his deputy, Mr Chima Onyekwere, said that the plan was busted on Friday night, when police reportedly arrested a man in unlawful possession of election materials.

He said that the materials included written result sheets that purportedly gave victory to PDP in the aborted Saturday’s presidential and National Assembly polls.

He further alleged that the plot, involving top government officials, was to be executed using men in fake military uniforms.

He said that the uniforms had already been purchased and stored in a secret location.

According to Ehiemere, the uniforms will be given to scores of carefully selected, trained and armed thugs, who would impersonate security operatives, while working for PDP.

He said that part of the plot was to also use Toyota Hilux vans, fraudulently branded in army colour to carry the thugs round the state on the election day.

He alleged that the thugs would intimidate voters and others on legitimate electoral duties as part of the designed to disrupt the voting process.

Ehimere said that the plot was hatched to once again deny the good people of Abia the opportunity to exercise their democratic right to elect credible leaders.

He warned that the plot would have triggered off a chain of violent reactions capable of endangering the lives of innocent people, if not uncovered and halted.

He said that PDP had become uncomfortable with the rising popularity of APGA’s governorship standard bearer, Dr. Alex Otti, hence the plot to rig the poll.

He, therefore, called on the leadership of INEC to overhaul its office in Abia, in order to remove officials that had compromised their positions.

Reacting, the Publicity Secretary of PDP, Chief Don Ubani, dismissed the allegations as blatant lies from the pit of hell.

Ubani said that PDP never contemplated such a heinous plot, pointing out that APGA had only exposed what it hatched to do to rig the polls.

Also, the Abia Commissioner of Police, Mr Ene Okon, said in an interview that the command had yet to receive such a report from APGA or any other party in the state.