I am convinced that God is going to unseat Buhari - Secondus 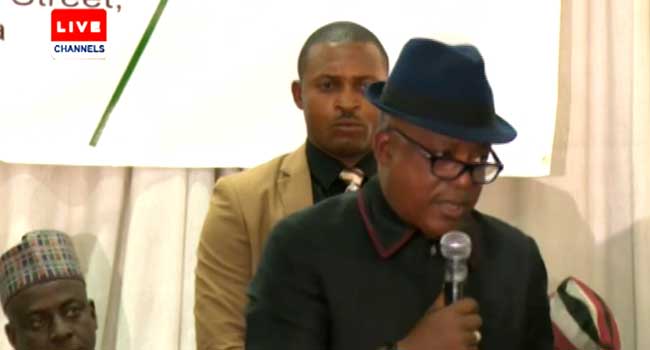 The National Chairman of the Peoples Democratic Party (PDP), Uche Secondus, on Tuesday said he is convinced that God will unseat President Muhammadu Buhari from office.

He also condemned the President for ordering security agents to deal with ballot snatchers ruthlessly during the general elections.

Buhari had admitted at the APC Caucus meeting on Monday that he had ordered security operatives to “deal ruthlessly” with anyone who attempts to snatch ballot box during the rescheduled general elections next Saturday, February 23, 2019.

During the meeting of the PDP National Executive Committee on Tuesday, the Mr Secondus questioned the statement by the President, demanding to know why he wanted the lives of Nigerians put on the line because of the elections.

He said, “Why do you want to kill your countrymen and women for the sake of elections, that you must be a President?

”Mr Secondus also accused the President of what he described as insensitivity towards the killing of Nigerians in the North East.

“Hunger, killings unemployment, you are not sensitive to it, when they kill in Plateau, you can’t make such a profound statement but when it concerns you, you want people to die so that you can be President? he asked.

The PDP chairman further accused the President of APC’s division in Imo and Ogun states.

Channels Tv reports that the PDP chairman called on leaders and members of the PDP to keep to the rules of the Independent National Electoral Commission (INEC) and not get involved in ballot snatching or any altercation with the military.