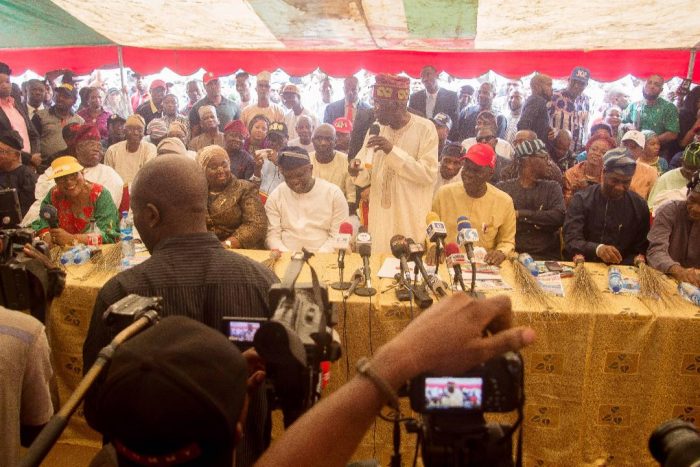 Tinubu made the appeal in Ikeja while addressing party faithful at a stakeholders meeting.

The meeting was called to perfect the party’s preparedness for the rescheduled elections on Feb. 23 and March 9 in the state.

The party leader said the APC government never discriminates against people from the South East and others in the state in the delivery of democratic dividends.

Tinubu said the state government provides equal opportunities to all residents irrespective of whether they are from the state or elsewhere.

The party leader said that the APC government has provided the environment for the people of the South East to conduct their businesses and succeed in the state.

He said the party expects them to support its candidates at the polls for progress.

“We appeal to our Igbo brothers from the east. This is the state where you conduct your businesses. Your children are in our schools. We don’t discriminate against them in our WAEC fees.

“Now this time, we say, help us, we say vote for us and our candidates,” he said.

Tinubu said he had to intervene when the popular ASPAMDA market and other markets dominated by the Igbos were faced with threats of demolition.

The party leader said he took the step to save the markets to protect the interests of the traders who are mainly from the South East.

Tinubu said the party would be monitoring election results from Igbo-dominated areas like Amuwo-Odofin, Ojo, Ajeromi-Ifelodun, and Surulere in anticipation of votes for APC by the people of the South East in the state.

In the 2015 elections, the APC lost some legislative seats to the PDP in the areas, though some of the winners later defected to the APC.

On the Presidential and National Assembly elections on Saturday, the party leader said he was confident that the APC would emerge victorious.

He said it was not possible for the Peoples Democratic Party (PDP) to defeat APC as they do not have the strength of the ruling party in all parts of the country.

Tinubu urged party members to work hard to make the victory a resounding one for the party on Saturday.

“We will beat PDP on Saturday. They don’t have our strength in the North West, in the South West and even in the Middle Belt. So how do they want to win? We will beat them.

“But I urge you our dear party members, you need to make the victory a resounding one. You must work hard and mobilise everyone to vote for our candidates,” he said.

He urged members, particularly women, to embark on door-to-door campaigns in their neighbourhoods to canvass votes for the party.

Tinubu warned members against violence but urged them to protect their votes to ensure victory.

On the rescheduled polls, he said the party had put the disappointment behind it and was working hard to record victory on Saturday.

He said the Independent National Electoral Commission (INEC) had the backing of law to reschedule elections if the need arises.

Tinubu said the party hoped that the rescheduled elections would be conducted successfully.

“INEC has the rule and the law on their side. They have postponed the elections; we believe anybody can run into crisis.

“When a plane gets into turbulence, sometimes the passengers shake, the plane shakes and the pilots shake.

“They eventually steady the plane. The prayer is that they should land safely and happily. We pray that INEC will land safely with the elections and APC will win,” he said.

Tinubu urged Nigerians to turn out en masse to vote President Muhammadu Buhari on Saturday for the continued progress of the country.