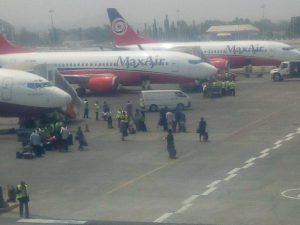 The Nnamdi Azikiwe International Airport, Abuja, on Thursday witnessed an upsurge in passenger traffic and flight operations on many domestic routes as many people travelled for Saturday’s presidential and National Assembly elections.

At the boarding gate on Terminal D, a large number of travellers were seen queuing up to board Aero flights to Lagos and Asaba.

In Terminal B, activities also peaked at Arik and Max counters where many passengers were being processed for boarding.

An Airport official, who pleaded anonymity, said that many airlines were fully booked and that traffic was heavier in the early morning flights.

He said that the fare slash announced by Arik and Aero to encourage voters also encouraged many passengers to book their flights, accounting for the traffic upsurge.

According to him, today is the peak of the traffic because of the public holiday on Friday and as such, there is heavy traffic early this morning.

Meanwhile, the Station Manager, Max Air, Mr Abdullahi Saroke, said the traffic was less compared to the previous week before the election was postponed.

Saroke said that the airline had full flights to the northern routes like Kano, Yola and Maiduguri, adding that other routes had been recording low passenger turnout.

He said that Max Air, unlike Arik and Aero, did not slash its ticket prices because of the election, as it has one of the lowest fares among the domestic airlines.

“We are not having much passengers today compared to what it was last week before the election was postponed.

“Our northern routes such as Kano, Yola and Maiduguri are the most patronised today while other routes like Lagos and Port Harcourt are not doing too well today.

“I think it’s because many people who travelled last week didn’t come back after the postponement,” he said.

A staff of Arik who pleaded anonymity, said that the passenger turnout was not as expected in spite of the reduction in fares to N16, 000 on all routes.

He said that the airline did not record full flight on all its routes.

A passenger, Michael Audu, said he was travelling to Yola to vote, and appealed to every eligible voter to ensure that they vote.

He said that politicians had the duty to ensure the success of the elections.

H also encouraged Nigerians to come out massively to vote during the elections.

“My advice to INEC and politicians is that both have the responsibility of ensuring that the elections are free, fair and peaceful,” he said.