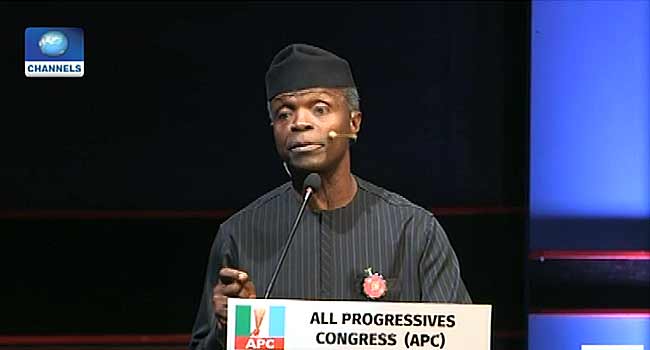 The Nigeria’s Vice-President, Prof. Yemi Osinbajo, has said most propaganda and accusations against President Muhammadu Buhari are absurd and untrue.

Osinbajo said this on Wednesday night while responding to questions at an interactive session with Lagosians held at Muson Centre, Lagos.

The News Agency of Nigeria (NAN) reports that the interactive session tagged: “Unveiling The Truth” was organised by some christian youths and leaders.

NAN reports that participants used the medium to ask of questions bothering on security, economy, social welfare for the unemployed, anti-corruption fight, and timing of the TraderMoni programme.

Other questions bothered on “Next Level” slogan, farmer/herders crisis, lopsided federal appointments, Islamisation, Buhari’s commitment to address critical issues in the country among others.

Responding, Osinbajo said that President Buhari was very committed to address the problems facing the country.

According to him, contrary to insinuations, Buhari is impartial in addressing farmer/herders crises and has no intention at all to Islamise the country.

“President Muhammadu is possibly one of the most committed people I have ever met. He is committed to seeing that resources of this country are used for this country.

“In general terms, we find that there is fairness in the distribution of appointments. Many of the accusations against Buhari are not true.

“Sometimes, people listen to propaganda and if we look at the facts, things are totally different. On Islamisation, first of all, it is untrue, it is propaganda.

“Anybody who complains that President Buhari is propagating islamic agenda, how is that possible?

“A lot of these are just propaganda, never listen to these. Many of these are absurd, they are deliberate propaganda. They come from the same source. Don’t believe them. Let’s be fair,” Osinbajo said.

The vice-president, who urged Nigerians not to fear or doubt the good intention of the president, advised Nigerians to stop spreading rumours about things that never happened.

He noted that the major cause of farmer/herder crisis remained pasture and water, which he said the government had made efforts to address.

On the lopsided federal appointments, Osinbajo said that the Southeast with five states had five ministers more than some regions with higher number of states.

On TraderMoni, he said that the National Assembly approved the money for it and that it was meant to lift many Nigerians out of poverty.

On the timing of implementation being close to electioneering, Osinbajo said that government kicked off the Social Investment Programme (SIP) after the budgetary allocation was passed by the National Assembly.

According to him, the party never promised N5,000 monthly stipends for the unemployed, but for the vulnerable which is ongoing.

He said the government had engaged so many youths in its N-Power programme and had to increase the number to 1.5 million.

On the standard of tertiary education, Osinbajo said that the major issue affecting education was not so much with the curriculum, he advocated private sector thinking, ideas to enhance public education.

He added that the government would continue to create enabling environment and provide funding.

On criminality, the vice president said that the way forward was local policing and intelligence as well as immediate arrest and prosecution of criminals.

On security, he said that the country had made significant progress and moved forward from what the situation was before the 2015 general elections.

He said the APC “Next Level” slogan centred on job creation, power, making credit more available to entrepreneurs, agriculture, infrastructure and others.

He urged Christian leaders to jettison thinking about any islamic agenda, saying that many Christians are in the cabinet of President Buhari.

He said that the media should desist from spreading rumours, decrying fake news about Buhari being another person from Sudan.

While addressing the accusation that the present administration often blames previous administration, Osinbajo said that the country could not move forward without considering the past.

According to him, corruption remains the bane of national growth and development, saying that most of the challenge confronting Nigeria are caused by wastefulness of past governments.

The highlight of the interaction was the high praise led by choir and power-packed prayer for the country and the general elections led by Bishop Wale Oke.

The participants prayed for God’s mercies and protection for Nigeria and the vice president especially in view of the  recent air crash involving him.