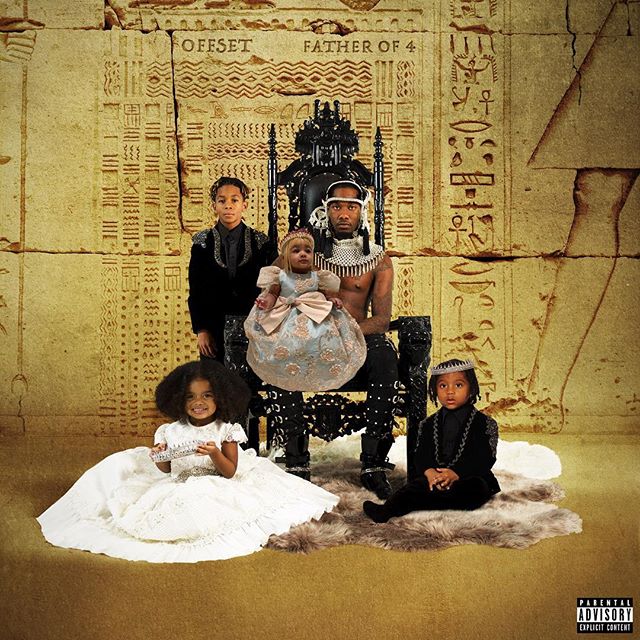 Offset’s latest album has officially dropped. The Migos rapper’s first solo project features Cardi B, Travis Scott, 21 Savage, J. Cole, Gucci Mane, Quavo, and more. He teased the album during the 2019 Grammys with footage of Cardi B giving birth to their daughter, Kulture who appears on the album cover alongside his other kids – Kody Cephus, Kalea Marie Cephus and Jordan Cephus.

On album track “Don’t Lose Me,” Offset addresses his split from Cardi B last December. After sampling the apology he recorded the following week, he reflects on the split and his attempts at reconciliation. “Coolin’ on the boat, in the ‘yo/I really miss her/Demons in my soul got issues,” he raps. On the (apparently reunited) couple’s collaboration “Clout,” he invokes Kim and Kanye: “My bitch on your ass, Kim K/No disrespect/The nigga be trippin, but we love Ye.”

”Father of 4” was originally set to drop on December 14 but was postponed without explanation. The album’s “Red Room” surfaced on streaming platforms last year, but was later removed. Offset recently shared the visuals for the newly-dropped single.

Offset is the last member of Migos to share a solo project behind Takeoff’s The Last Rocket and Quavo’s QUAVO HUNCHO. In 2017, Offset joined 21 Savage and Metro Boomin for the collaborative project Without Warning. Migos’ last release as a group was 2018’s Culture II.