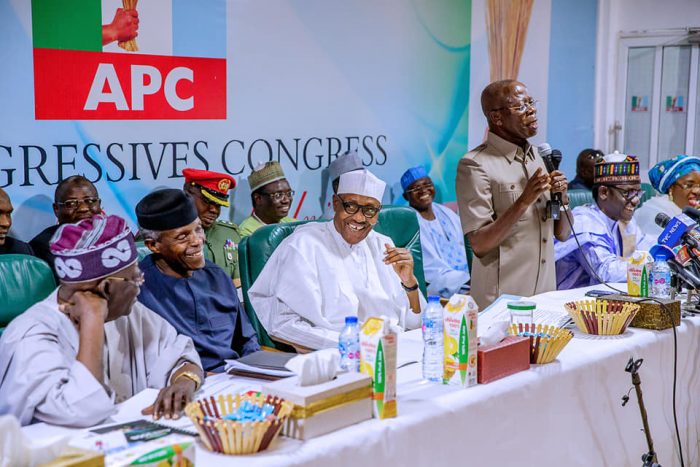 The All Progressives Congress (APC) Presidential Campaign office located in the Central Business District of Abuja is agog with sounds of jubilation as party members and supporters await the final announcement of the Feb. 23 Presidential election results by the Independent National Electoral Commission (INEC).

The News Agency of Nigeria (NAN) reports that from results announced so far by INEC at the Abuja National Collation Center, it became crystal clear that President Muhammadu Buhari, the APC Presidential candidate for the election is coasting to victory.

Party supporters and members who were mostly youths, were seen in high spirit at the APC Presidential Campaign Office as they expressed delight at the results announced so far.

While some of the youths were seen dancing on the street, others were busy putting finishing touches to the already arranged party stage with cake and other items on display.

Some of them who spoke on grounds of anonymity, said: ”the party would be a bang”.

President Buhari was adopted as the APC sole candidate at the party`s National Executive Council (NEC) in August 2018.

He contested the Saturday’s Presidential election with Atiku Abubakar, the presidential candidate of the Peoples` Democratic Party (PDP) and over 60 other candidates from other political parties.

Twelve presidential candidates from other political parties had earlier endorsed Buhari’s candidacy after withdrawing from the presidential race two days to the election, saying he was the best for the country at the moment.