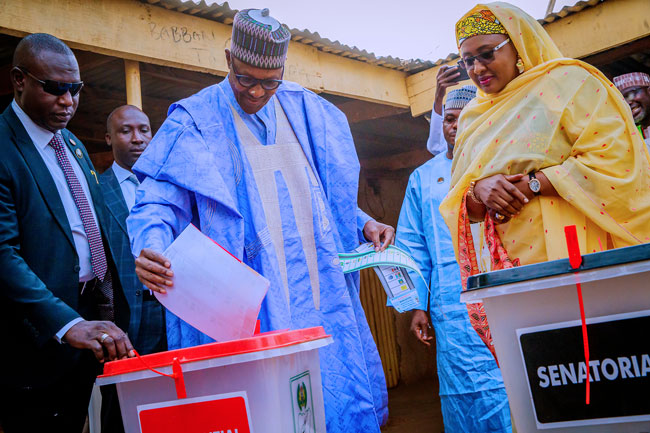 Buhari, along with Aisha, casting his vote in Daura, Katsina State

The National Chairman of Advanced Peoples Democratic Alliance (APDA), Mr Shittu Mohammed, has congratulated President Muhammadu Buhari on his reelection for a second term, saying he did not see it as a surprise.

Shittu told News Agency of Nigeria (NAN) on Wednesday in Abuja that he saw Buhari’s reelection coming “because Buhari is a man of the people, especially at the grassroots.”

INEC declared Buhari re-elected having polled 15,191,847 votes, winning in 19 states, to defeat other 72 candidates including Atiku Abubakar, the candidate of the Peoples Democratic Party (PDP) who scored 11, 255,978 votes and won 17 states and the FCT to occupy the second position.

“The reelection of Buhari is not a surprise because he is very popular among the lower cadre and those that believe that he was elected to rescue the nation. So he is a very popular man.”

Shitu advised Buhari to continue with his developmental projects in the country.

He said “my advise is that Nigerians have again given Buhari their mandate, he should use it to develop Nigeria. He should make sure that he improves on his developmental programmes.”

The National Chairman of the United Peoples Congress(UPC), Dr KennethIbe-Kalu, also congratulated Buhari on his re-election, saying his good works worked for him.

“I am happy about it because in every contest, there must be a winner no matter the process.

“Like it has been said, 15 million votes is consistent with President Buhari, if you follow the 2015 election.”

KennethIbe-Kalu, who commended INEC for job well done, urged Nigerians to see the result as victory for all.