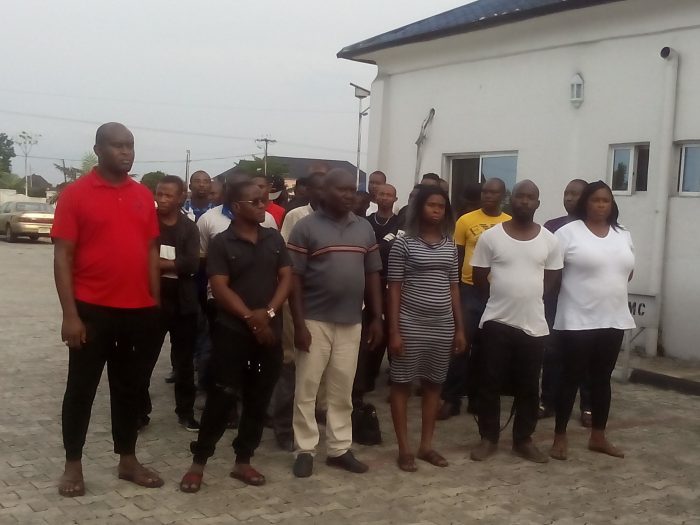 Some of the suspects

The Nigerian Army on Wednesday, in Port Harcourt, Rivers State paraded 30 suspect,  including a serving Commissioner, lawmaker in the Rivers House of Assembly and a Major in the army over an alleged plan by Governor Nyesom Wike to use them to comprise members of the Nigerian Army in last Saturday’s Presidential election.

The Army Public Relations Office,r 6 Division Nigerian Army (NA), Colonel Iliyasu Aminu, who paraded the suspects to Journalists on a live television said there was a daring attempt by Wike to compromise security agencies, particularly troops of 6 Division NA with hefty financial inducements to help him in his illegitimate act of thwarting a free and fair electoral process to his favour while accusing the army and its command hierarchy of bias daily.

He stated that the army, in close collaboration and synergy with all other security agencies in the Division’s Area of Responsibility (AOR) which covers, Akwa Ibom, Bayelsa, Delta and Rivers States and its commitment and loyalty to the Constitution of the Federal Republic of Nigeria resolved to be neutral and apolitical, but was underestimated by Wike.

He said “on Saturday, 23rd February, 2019 at about 8:45 am following a tip of on attempt by Governor Wike’s aids to induce and compromise troops deployed at the CBN Port Harcourt premises, Major AP Ubah and 3 other Police personnel, DSP Owen Oyoku Irikefe (Camp Commandant, Rivers State Govt House), Sgt Akanu Garba , Inspector Hycent Oboi and Sgt Nketan Chucks were arrested by a team from HQ 6 Division.”

Colonel Iliyasu revealed that Preliminary investigations led to the discovery of N2.25 million in a Range Rover belonging to the DSP. Other items recovered are 4 INEC 2019 Electoral Tags, Customised Rivers State Government House brown envelopes while the sum of 500,000 was found in the Toyota vehicle belonging to Maj AP Ubah which he confessed was given to him by the Governor’s aides in addition to offer of a well-furnished accommodation for the period of his tour of duty.

According to Iliyasu, “on the same day, at about 7:00 am, a member of Rivers State House of Assembly, Hon Opokri Wanaka, representing Ahoada East in company of Dr Reason Onya Williams, Rivers State Commissioner for Urban Development visited own troops Camp at Akinima and requested to be acquainted with the Commander of the troops at the location. Hon Opokri offered the officer some amount of money he removed from his pocket but the officer not only rejected the offer but sent the duo away.

“Incidentally, while the officer and his men were manning a Check Point at Mbiama Bridge, a white Hilux vehicle with a Rivers State Government Reg No.L02-03RV RIVERS and 8 occupants was stopped for routine search and clearance. A carton and 2 bundles of INEC 2019 presidential Election ballot papers were discovered in the vehicle.

“Preliminary investigation reveals that none of the occupants of the vehicle is an INEC staff, INEC Ad-hoc staff or security agent.”

According to the spokesman, on-the spot interrogations, Wanaka and Williams revealed that they allegedly tried
to convince the troops that the vehicle was part of INEC’s convoy that was left behind and that the vehicle should be allowed to go because the electorate were waiting.

“The recorded audio voice telephone conversation alleged to be that of Governor Wike was played over and over for Journalists. The bundles of money found on the camp Commandant and the Major AP Uba were display before the Journalists,” he said.

However, there was a mild drama during the parade which was beamed live on television, Dr Reason Onya, DSP Irikefe and other suspects denied the allegations, alleging that they were deliberately framed to get at Wike.

In swift reaction, Wike said the State Government had written to the International Criminal Court to prosecute the General Officer Commanding ( GOC) 6 Division of the Nigerian Army, Major General Jamil Sarhem for prosecution for crimes against humanity.

Wike said instead of running in circles, the GOC should explain to Nigerians the reasons why the 6 Division allegedly stormed Collation Centres in Ikwerre, Emohua and Okrika Local Government Areas with INEC Electoral Officers, accusing him of stealing electoral materials and concocting results.