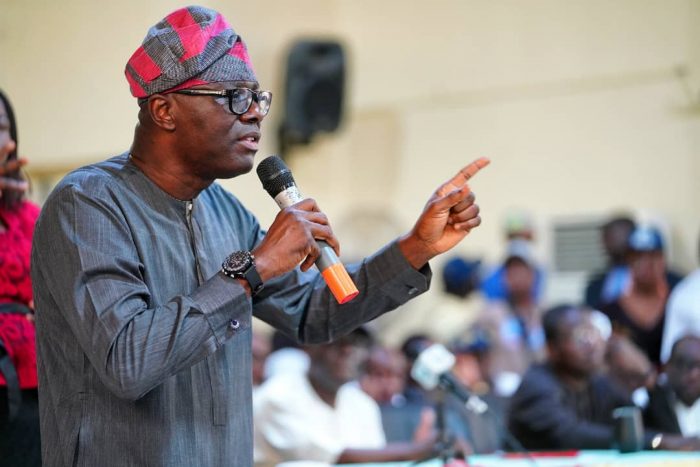 The All Progressives Congress, APC, candidate in Lagos for the March 9 governorship election, Babajide Sanwo-Olu on Thursday promised to pay state workers above the N30,000 National Minimum wage if elected governor.

He also promised civil servants improved condition of service as the issue of collapse of Salary steps would be looked into.

Sanwo-Olu, who addressed a huge crowd of civil servants at the Adeyemi Bero Auditorium, Government Secretariat in Alausa, Ikeja, Lagos stated that the benefits that existed before but were denied during the present administration would be reinstated by his administration.

According to him, his government would consider civil servants welfare because they would drive his vision for the state which is targeted at building an enviable smart city.

He assured workers that his administration would operate an all inclusive government, as workers would be engaged, trained and motivated to work effectively for Lagos development.

“As part of the motivation, we will take the minimum wage above the level presented at the National Assembly. And the payment will not exceed the 23rd of every month. This is part of the welfare package we have for civil servants in Lagos.

“We will also ensure a car package for senior staff that have attained directors’ status in the public service. We cannot allow workers that are required to stay back and work to start looking for bus to convey them home at night.
“On the staff bus, I discovered that civil servants now pay to repair the vehicle. When elected, our administration will replace the rickety vehicles for the staff. All these, we believe would motivate the staff to deliver in every task they have been mandated to do,” he added.

Sanwo-Olu further said his administration, if elected, would restore local and international training benefit to the State public service.

“We cannot give you tool alone without training because they accompany each other. It is when we have done that the government can have an effective public service that drives the policies. This, we believe will make the workers have the required skill to perform the task of taking Lagos to greater height and it will be considered an important issue by our administration,” he said.

Sanwo-Olu disclosed that his administration, when elected, would establish a platform for retired civil servants to act as volunteer workers, saying, “we always have some civil servants that are still active but due to the public service barrier on age, they leave service.”

The APC candidate assured that his government would complete all existing projects, especially the Lagos-Badagry Expressway which served as a major entry route for foreigners from Western African countries visiting the country.