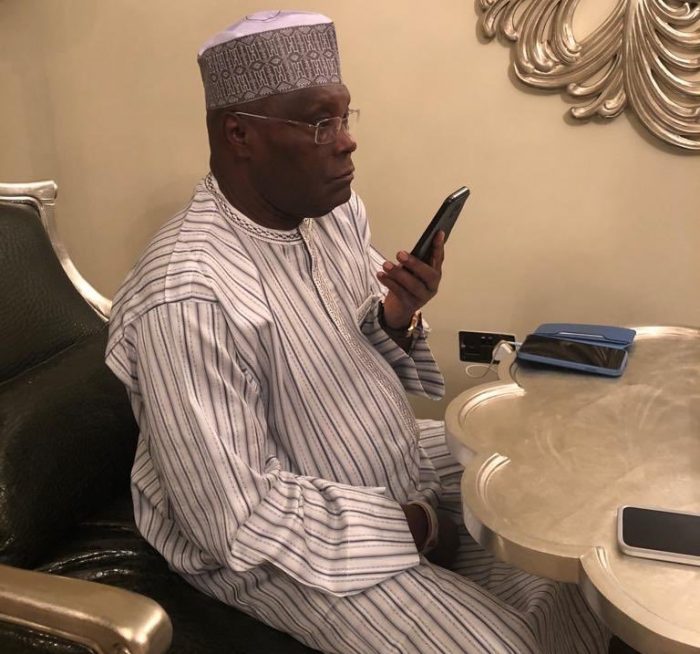 A takeover of Lagos by any means necessary is a “consolation prize” being contemplated by the camp of the Peoples Democratic Party (PDP) candidate Atiku Abubakar after a crushing defeat by President Muhammadu Buhari in last Saturday’s presidential polls, it was learnt last night.

The Nation reported that the move was one of the resolutions at an emergency strategy meeting held by the Atiku team when it became apparent that President Buhari had won by a wide margin, the first being a formal rejection of APC’s victory as announced by the Independent National Electoral Commission (INEC).

Even as the PDP flag bearer is still mulling his legal team to challenge Buhari at the tribunal, his strategists believe that taking over Lagos, the nation’s commercial nerve centre, will enable the opposition party become an effective countervailing force to APC controlling Abuja, the political headquarters.

A similar bid was launched for Lagos in April 2015 by the then President Goodluck Jonathan with the deployment of dollars to induce voters after the PDP lost the presidential poll to the APC. The bid failed.

“To actualise the new plot, we can confirm that a huge war-chest has been mobilised by Atiku’s camp to finance ahead of the March 9 state election a vicious smear campaign against the National Leader of the ruling All Progressives Congress (APC), Asiwaju Bola Ahmed Tinubu, believed to have coordinated PDP’s defeat as the Co-Chairman of the APC Presidential Campaign Council,” a source said last night.

The source went on: “Specifically, Atiku’s hatchet men are to spread anti-Tinubu messages in the traditional media and social media, deploying any ‘means necessary’.

“The first leg of the strategy meeting, it was reliably gathered, held at highbrow Intercontinental Hotel on Kofo Abayomi, Victoria Island, Lagos Saturday night where the PDP governorship candidate in Lagos, Mr. Jimi Agbaje, met with Senator Tokunbo Afikuyomi and a few others to perfect the plan to recruit a faction of Afenifere and willing human rights activists to create a facade that the anti-Tinubu campaign is the initiative of civil society organisations (CSOs).

“The support of the likes of Olisa Agbakoba, SAN, Mr. Yinka Odumakin has been secured in this connection.

“In fact, the inaugural press conference is to be addressed by Mr. Agbakoba and Odumakin, whose relentless media offensive against Buhari had failed to sway Yoruba votes to Atiku across the Southwest last Saturday.

“Afikuyomi, described last night as a ‘Judas’ after benefitting politically from Tinubu in APC, was said to have been part of the ‘Dubai retreat’ hosted late last year by the Atiku camp after winning the PDP presidential ticket to draw up a ‘war plan’ against Buhari.

To evade public scrutiny or being accused of ‘anti-party activity’ by APC, Afikuyomi was said to have opted out of the Dubai-Abuja flight and rather adopted a decoy by flying to Lagos through Uganda.

“Interestingly, Afikuyomi had been the chief coordinator of the second term bid by the outgoing Governor Akinwunmi Ambode of Lagos which crashed in the APC primaries held in October in 2018.

“Oluwo, who resigned as the Lagos State Commissioner for Energy, has been described as commander in the anti-Tinubu plot, having superintended over the multi-billion Naira street lights projects exclusively under Ambode and has serially been fingered as the secret ‘emissary’ between Ambode and Agbaje.”

After his exit from the Lagos cabinet last October, Oluwo declared support for Agbaje’s governorship ambition.
But Governor Ambode has consistently denied any link whatsoever with the funding of Agbaje’s campaign.

Party elders, it was further learnt, were incensed following startling revelations of mouth-watering patronage Ambode had doled out to Afikuyomi even while most of them were shabbily treated.

“Among Ambode’s largesse to Afikuyomi is an eye-popping mansion located in the highbrow Ikeja GRA, the furnishing of which was said to have cost nothing less than N400 million”, the source claimed.

Lagos has always been coveted by the PDP. In 2003, the party made a failed attempt to seize the state, but failed as the South West zone then under the Alliance for Democracy fell into the PDP’s basket. The party also made vigorous attempts in 2011 and 2015, but also failed.

During a campaign trip to Lagos, Atiku was widely quoted to have said he saved Lagos from PDP’s capture in 2003.