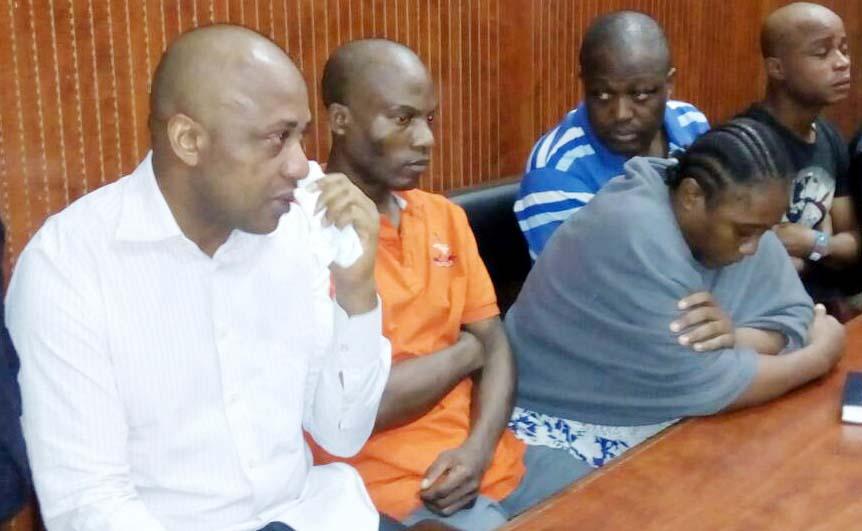 Evans and members of his gang in court

Absence of Evans’ counsel, Mr Chino Obiagwu (SAN), on Friday again stalled the continuation of hearing in the on-going trial of the alleged kidnap kingpin, Chukwudumeme Onwuamadike a.k.a Evans.

Evans trial was on the last adjourned date, Jan. 30, stalled due to the absence of one of the defence counsel, Mr Emmanuel Ochai.

In the first charge, Evans is standing trial alongside Joseph Emeka, Ugochukwu Nwachukwu and Victor Aduba.

In the second charge, he is standing trial alongside Joseph Emeka, Linus Okpara and Victor Aduba.

At the resumed hearing on Friday, Evans’ counsel did not make an appearance but sent a letter informing Justice Adedayo Akintoye of his absence.

No member of Evans’ legal team was present.

However, the Prosecutor, Mr Y. G. Oshoala, who drew the court’s attention to the absence of Evans’ counsel said it was not the first time such was happening.

He said that on the last adjourned date, on Jan. 30, one of the defendant’s counsel was absent and the case was adjourned.

“This is not the first time such is happening.

“The Supreme Court stated that the court is not a slave of time that must wait for a party to come and present its case.

“We submit that the court cannot wait for the defence counsel,” Oshoala said.

He directed the court’s mind to the need to do justice to all parties,” the state, the defendant and the public.”

But making an order for adjournment, Justice Akintoye said: “I have noted your observation.

“I will give them the benefit of doubt because the defence counsel is a Senior Advocate of Nigeria. I assume he is not just wasting the time of the court.”

Consequently the judge adjourned the case until March 22, for adoption of written addresses in the trial within trial.

On January 16, during a trial within trial, Evans denied the confessional statement he made to the police after his arrest in 2017, saying it was made under duress.

Evans told the court that he signed the statement under duress to save him from being tortured to death.

Evans gave details of how members of Inspector General of Police (IGP) Intelligence Response Team allegedly tortured and killed several others, who were paraded alongside him in his presence.

However, Evans, was cross-examined by the Lagos State Counsel to prove that his statement was not taken under duress.