Blind girl commits suicide with her guide dog by her side 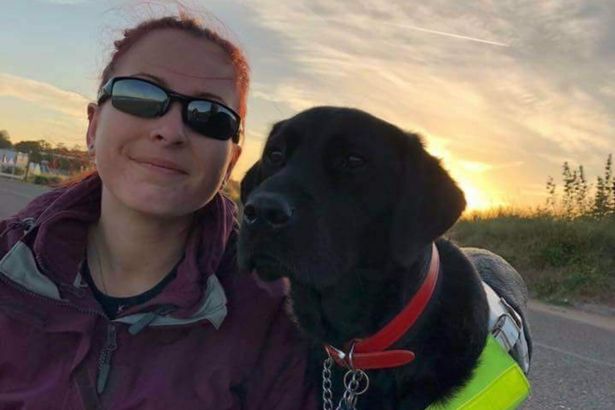 The deceased and her dog

A family have spoken of their heartbreak after their ‘inspirational’ daughter killed herself with her guide dog by her side.

Jade Clements, 24, who was registered blind, was in the final year of a biomedical sciences degree at Keele University when she took her own life.

An inquest , held at North Staffordshire Coroner’s Court, heard how Jade, who had been getting first class marks in her studies, had hanged herself in a student hall of residence.

According to the Mirror, security staff had gained access to the room after friends raised the alarm when Jade sent a final distressing message.

They found her guide dog, Toffee, pacing up and down inside the room, reports the Stoke Sentinel .

Now, her distraught family have paid tribute to their daughter, describing her as a ‘total inspiration’ and paying tribute to her ‘courage, infectious smile and mischievousness.’

Jade’s father, Brian Clements, said: “After her death, we decided to raise funds for the charity Guide Dogs as they had supported her with Toffee.

“She had had him for about 18 months and he gave her independence.

“Toffee was part of her life and we just couldn’t give him back. He now lives with Jade’s brother, Luke.”

Jade, from Godalming in Surrey, had been dealing with a number of health issues as well as a recent relationship break up, the inquest heard.

As well as problems with her sight, which was linked to a hereditary condition, Jade had scoliosis, bipolar disorder, insomnia and undiagnosed seizures.

She was on various medications and said to be waiting for an appointment with a psychiatrist.

Her health issues meant she had spent several periods away from university.

But she decided to return and was staying on the campus during the Easter holidays.

Jade’s friend, Samara Hussain, had also remained at Holly Cross halls of residence and received a message from Jade just house before her death on March 29, 2018.

In a statement, Samara said: “She [Jade] said she had relapsed into depression. I was very concerned. I rang her and she was crying.

Jade and Samara then spent a couple of hours together in Samara’s room and Jade appeared to perk up.

They then arranged to meet again the following day.

But after returning to her room, Jade sent several other messages.

A friend based in the US became so concerned about Jade’s behaviour that she even contacted police in the UK.

By that point, Keele University staff had already been alerted.

Risk assessment coordinator Tonya Bobmanuel, who went to knock on Jade’s door, said: “I heard a dog and some shuffling around in the room, which I thought was Jade coming to the door.”

But when there was no answer from Jade, Tonya called security who then used a pass key to enter the room.

A post-mortem examination confirmed Jade died from hanging. She also had a significant amount of alcohol in her system.

Recording a conclusion of suicide , North Staffordshire coroner Ian Smith said: “For some reason, she had decided to end it all. An awful end to a promising career.”

Jade’s family has now raised almost £7,000 in her memory on a GoFundMe page.

Some of the money was used to pay for Jade’s funeral, while the rest was donated to Guide Dogs.