Videos: Resurrection saga: I challenge you to raise Mandela from the dead, Pastor confronts colleague 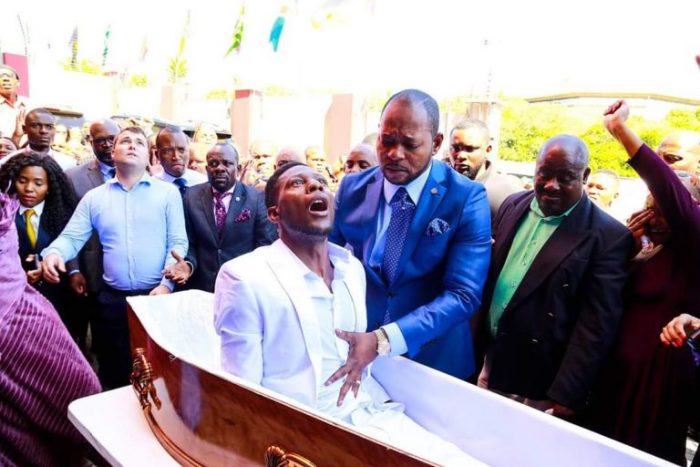 A religious war is brewing in the South African “prophet” circles after the leader of the Incredible Happenings Church, Pastor Paseka “Mboro” Motsoeneng, confronted his fellow colleague, Pastor Alph Lukau for “bringing Christianity into disrepute” and charged him to raise former South African President, Nelson Mandela from the dead.

Ironically, Mboro, himself claimed to have gone to heaven and came back claiming that he had taken selfies in heaven. Soon after returning from the promised land, Mboro said he was willing to share his photos with people, but they had to “pledge” R5 000 to his church first. However, before people could “purchase” the photos, Mboro claimed that the Samsung Galaxy S5, which he used to photograph the heavens had disappeared, iharare reports.

According to the BBC, Mboro confronted his colleague for staging a bogus resurrection.

Self-styled prophet Motsoeneng stood outside the locked gates of Pastor Lukau’s church and shouted, “I’m here to get answers.”

He said if the pastor really had the power to resurrect, they should head over to Nelson Mandela’s grave.

A viral video showing the supposed resurrection was widely mocked.

It shows Mr Lukau shouting “rise up” to a man lying in a coffin who then jerks upright to cheers from worshippers.

Funeral companies said they were manipulated into being involved.

“I’m not here to fight anyone, I’m here to get answers from my fellow brother in the Lord,” Motsoeneng, of the Church of Incredible Happenings, shouted outside Lukau’s church near Johannesburg.

“If it’s true that you resurrected a man, then let’s go to Mandela’s grave to do the same.”

“We do not want to interfere with people’s religious beliefs, but we should have a conversation about how we deal with these bogus pastors,” he said.

Three funeral companies said they were manipulated by Pastor Lukau’s “scheme” and were taking legal action for damage to their reputations.