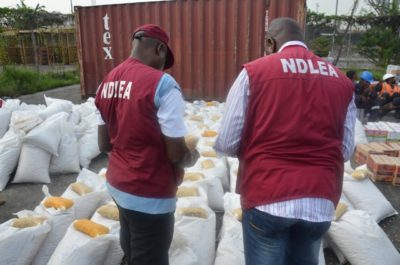 Edo State Command of the National Drug Law Enforcement Agency (NDLEA), has announced that no fewer than 1,247 suspected drug criminals were arrested between 2015 and 2018.

The State Commander of NDLEA, Mr Buba Wakawa, who disclosed this in Benin, said the Command also seized 186,501kg of various narcotic drugs and 164.6 hectares of cannabis plantation destroyed in the same period.

Buba disclosed this at the weekend during the inaugural meeting of the Edo State Drug Control Committee (ESDCC).

He said that a total of 726 persons with drug abuse problem were counselled, while 15 drug dealers were convicted at the Federal High Court in Benin.

According to him, “We can change the negative narrative of cannabis plantation to food production in Edo State. We can also reduce the number of school dropouts, reduce the rate of criminal activities thus preventing cultism and promoting sound health.”

The plan, he said, seeks to address the disparity between law enforcement and drug demand reduction.

“The current master plan 2015 to 2019 is a product of extensive consultation with stakeholders, thus lending credence to the fact that the Agency cannot win the fight alone,” he said.

The State Governor, Godwin Obaseki, was represented by the Commissioner for Health, Dr David Osifo, at the event.

He noted that drug control guarantees public health and safety, active and vibrant workforce as well as a secured future for the youths.

The Governor said it is dangerous for any government to treat the problem of drug abuse with kids’ gloves.

He charged the committee to work within the terms of reference in addressing the drug problem in the State.

The committee is expected to formulate and implement policy decisions on drug control. Other functions include the provision of structures at the State level in coordinating and implementing drug control programs in partnership with stakeholders.