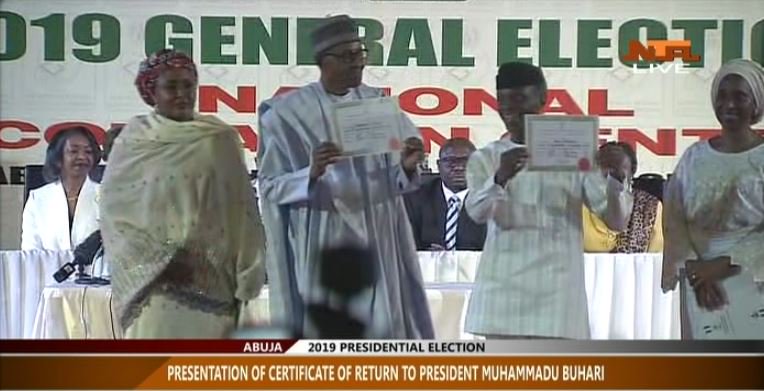 Buhari and Osinbajo display their certificates of return

One of the facts that struck me after the release of the 2019 presidential election results in the last week of February was the relatively low turnout. Hitherto, anecdotal evidence suggested that turnout was ‘impressive’. On a relative basis, it was not. But it was indeed impressive on an absolute basis; especially in light of the prevailing factors of the one-week delay of the poll, security fears and the logistical challenges of the Independent National Electoral Commission (INEC).

A well-known public figure made an interesting point about what could be responsible for the relatively low turnout. His view was that the turnout figure for the election in 1999 (30 million), 2003 (42 million), 2007 (35 million) and 2011 (40 million), which did not use card readers for voter accreditation, were probably bloated. Put simply, they were higher because it was easier to rig elections back then when card readers were not part of the process.

So, the more reliable base to compare the 2019 turnout of 29 million should be the 2015 poll figure of the same amount. Why? Card readers were first used in 2015. In a nutshell, the turnout would be poor or good depending on whether you choose to look at the proverbial ‘glass of water’ as half-full or half-empty. Still, there was indeed significant voter apathy. And it is likely the one-week delay contributed to the disinterest.

Nothing Wrong With Going To Court

I have been asked whether the decision by the main opposition Peoples Democratic Party (PDP) candidate Atiku Abubakar to go to court is good or bad for the economy. My view is that it is good for our political development. Thus, unlike the popular view that Mr. Abubakar should choose to be a statesman by conceding defeat, I think he would do a greater service to the nation by going to court.

There is clearly a need to unbundle INEC, for instance. While it could never be ‘independent’ in the real sense of the word, it could certainly be made more efficient. I would certainly recommend that the sequencing of the presidential, parliamentary and governorship elections be revised. A suggestion might be for the three to be held on the same day.

Since it is highly unlikely Mr. Abubakar would prevail in court, his primary object in taking legal action should be the improvement of our democracy. It could be hoped that the process would reveal certain irregularities and mis-steps that could, in the aftermath of his legal action, be corrected by a better electoral law.

Reform INEC and the Electoral Process

There is clearly a need to unbundle INEC, for instance. While it could never be ‘independent’ in the real sense of the word, it could certainly be made more efficient. I would certainly recommend that the sequencing of the presidential, parliamentary and governorship elections be revised. A suggestion might be for the three to be held on the same day. Because after the presidential and parliamentary polls, which are held on the same day, there is a tendency for most politicians and voters to align with the ‘winning’ party in subsequent polls down the line.

Another reason is already palpable. After winning re-election for its presidential candidate, Muhammadu Buhari, the ruling All Progressives Congress (APC) almost momentarily suspended Imo State governor, Rochas Okorocha and Ogun State governor, Ibikunle Amosun for anti-party activities. While the party is justified in doing so, in light of its quite well-known political preferences, it is highly unlikely the party would have made the move before the presidential poll, when its political capital was needed to support President Buhari.

Is the Abdul-Salami Abubakar peace committee wasting its time trying to nudge the opposition PDP’s Abubakar to concede defeat? Not really. But I do not think it is necessary. Mr. Abubakar has promised to only go to court. He has not, however, said he would engage in any form of public disturbance. Besides, the court action, which could take up to a year to finalise, may serve the additional purpose of keeping Mr. Buhari on his toes. What do I mean? There is a risk of complacency in any second presidential term. An active opposition may help to ensure that Mr. Buhari’s administration is more inclusive this time around.

In the aftermath of a possible loss at the courts, Mr. Abubakar could go on to organise policy dialogues and debates… He would also likely get opportunities to give lectures at think-tanks and universities… In the process, a new set of conservatives (‘Buharists’) and progressives (‘Atikulates’), that are younger…detribalised and bound by a patriotic desire to serve Nigeria, might emerge.

When Raila Odinga, the main opposition presidential candidate in the 2017 Kenyan presidential election, lost to the incumbent, Uhuru Kenyatta, an aggrieved Odinga engaged in protests, and even swore himself in as substantive president. A wise Kenyatta, after initially taking the aggressive route, came to the realisation that both of them actually wanted the same thing.

The Nigerian case is not as serious as the Kenyan one, however. Politics in Kenya is almost strictly along tribal lines. Kenyan politics is also dynastic. In Nigeria, some tribal loyalties exist. But Nigerians do vote across tribal lines when they want to. And there is yet to be a political dynasty at the federal level in Nigeria.

A potential legal action by PDP’s Abubakar could also engender continued debate about how we want to move Nigeria forward, how to move our politics to one of ideas and not the pocket. In the aftermath of a possible loss at the courts, Mr. Abubakar could go on to organise policy dialogues and debates that could even include the ruling APC officials in government. He would also likely get opportunities to give lectures at think-tanks and universities around the world. In the process, a new set of conservatives (‘Buharists’) and progressives (‘Atikulates’), that are younger, more enthused, detribalised and bound by a patriotic desire to serve Nigeria, might emerge.

Rafiq Raji, a writer and researcher, is based in Lagos, Nigeria. Twitter: @DrRafiqRaji