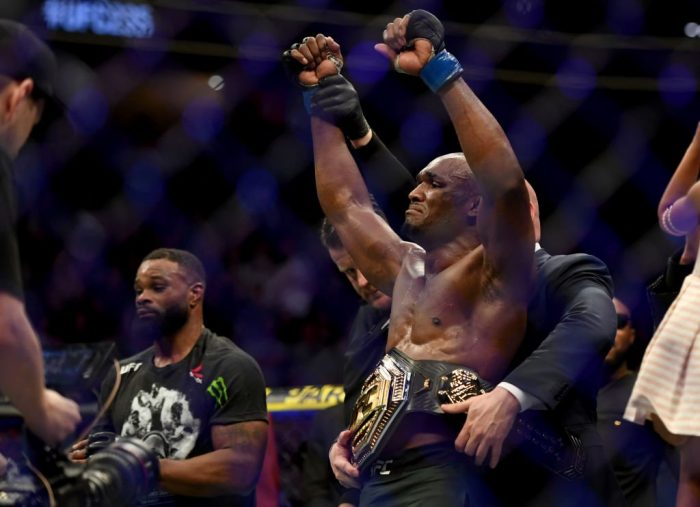 Kamaru Usman with his new title

The fighter, known as the “Nigerian Nightmare”, dominated the Las Vegas contest for the welterweight title.

BBC reports that the UFC is the biggest competition in MMA, where competitors combine boxing, kickboxing, jiu-jitsu, wrestling and other disciplines while fighting in an octagonal cage.

Usman, 31, produced the performance of his career to dominate long-reigning welterweight champion Woodley.

He extended his winning streak to 14 and maintained his unbeaten record in the UFC.

In his post-match press conference he revealed that before the match he had fractured his foot and had been walking around in a supportive boot all week.

He started off the press conference by greeting journalists in Arabic before switching to Pidgin.

“Nigeria, I have told them, we would do it, I told them we never fail. And we have done it today,” he said in Pidgin.

Usman was born in Nigeria, but left Benin City for Arlington in Texas as a young child when his family migrated to the US.

Twenty-three years later, he is proud of his nickname, the Nigerian Nightmare, he told BBC World Service’s Sportsworld.

But he is not the only sportsman known as the Nigerian Nightmare – something he is aware of.

He invited two others with the moniker to his match – the former professional boxer Samuel Peter and the former Kansas City Chiefs American Football, Christian Okoye.

Usman, a former winner of the Ultimate Fighter TV show, began wrestling at high school in Texas and was a top prospect throughout college.

“It was kind of time to make a switch and not just be a wrestler any more, but to be a fighter and to go and make a living for not just myself but my family as well,” he told Sportsworld.

Athletes like Usman have been switching over to UFC from other disciplines as the competition experiences a phenomenal rise in popularity.

The trend is illustrated in UFC’s price – the competition was bought in 2001 for $2m by the Fertita brothers. They sold it to a group of firms in 2016 for $4bn, according to Forbes business magazine.