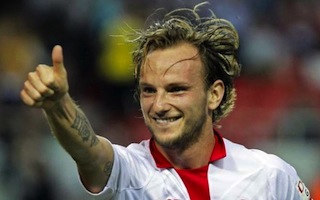 They beat their great rivals at their Bernabeu home for the second time in four days and moved a staggering 12 points clear of them in the standings.

Croatia international Ivan Rakitic struck the only goal of the game midway through the first half.

He delivered an ice-cool finish over Real Madrid goalkeeper Thibaut Courtois after being played in by a clever pass by Sergi Roberto.

Lionel Messi and Luis Suarez were largely kept quiet in a shy display from the champions in which their defenders Gerard Pique and Clement Lenglet were the heroes instead.

They bravely put their bodies in the way to snuff out Real Madrid.

The victory followed Barca’s 3-0 win over Real Madrid in a Copa del Rey semi-final on Wednesday.

It gave them a 10-point lead at the top over Atletico Madrid, who visit Real Sociedad on Sunday, and effectively ended third-placed Real Madrid’s title hopes.

“We are all going to enjoy this night as not many teams can say they have won twice in four days at the Bernabeu,” match winner Rakitic told reporters.

“We worked very hard for this victory and we deserve it. You have to fight, you have to stick your leg in and we are very happy.

“Every game is different, we did our homework well after the last game. We created a bit of danger in this first half, then played on the counter in the second. But winning here is always perfect.”

The win also took Barca ahead of Real in the history books, with 96 wins in the “Clasico’’ to their rivals’ 95.

They have now recorded four consecutive league wins away to Real Madrid for the first time.

Real Madrid were left to reflect on a third consecutive home defeat in all competitions for the first time since 2004.

They now have only one realistic objective for this season — retaining the UEFA Champions League which they have monopolised since 2016.